SBCC’s Phi Theta Kappa band together to clean up beach 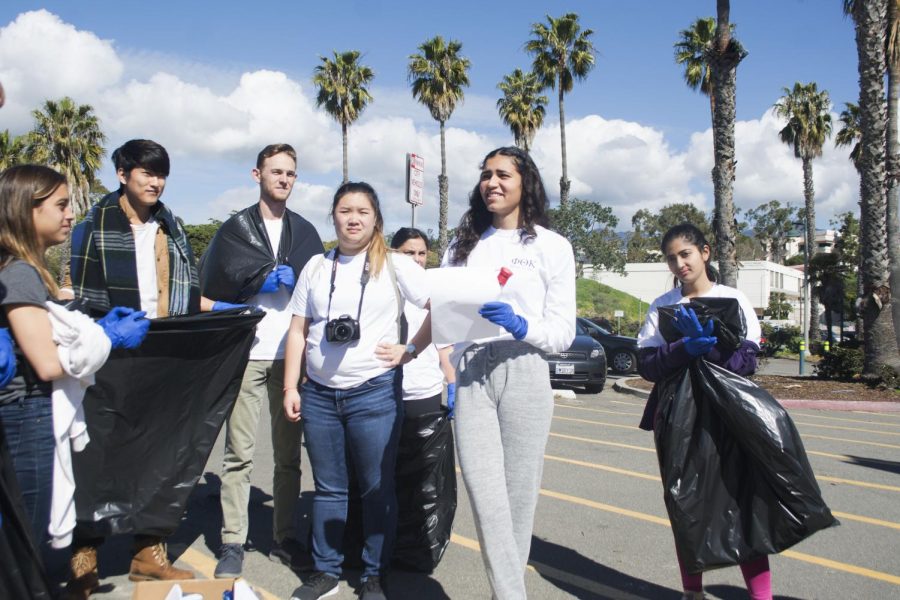 Layla Tondravi, a member of the leadership group of SBCC’s Phi Kappa Theta Honors Society, speaks to a group of students gathered to participate in a beach clean up event Saturday, March 9, 2019, at Leadbetter Beach Park in Santa Barbara, Calif.

The Phi Theta Kappa club hosted a beach cleanup Saturday in hopes of giving back to the local community.

“It’s our beach,” he said, pointing behind him to the college. “So we may as well keep it clean.”

Many members of Phi Theta Kappa gathered in front of the beach on a warm Saturday morning, armed with ambition and garbage bags, before heading out and slowly combing the beach for trash.

Layla Tondravi, vice president of service, said that participating in volunteer events helps remind her of the privilege she has and makes her grateful for her community.

“When you do stuff like this it really puts your life in perspective,” she said.

Most of the trash being picked up was small pieces of plastic, cigarette butts and food scraps. Several members said the amount and variation of trash changes throughout the year, but that summer usually has them filling up their bags and going back for more.

Club member Ingrid Tien said that serving the community is a core value of the club.

“It’s all about giving back to the community that put us here in the first place,” Tien said.

Pulkita Jain, executive vice president, said Phi Theta Kappa puts on events weekly and while many of the events are service based some are for the entire campus to enjoy.

“We’re having a Bollywood movie night in two weeks,” she said. “So we’re just doing it to celebrate community.”

Jain also said they plan on having an event for the upcoming Persian New Year to “explain the significance” of the celebration.

Trondavi said she enjoyed being around “like-minded, academic people”

She said that although City College has many clubs and ambassadors, Phi Theta Kappa is “more committed to improving the community.”

Updates on upcoming events from Phi Theta Kappa can be found on their Instagram.