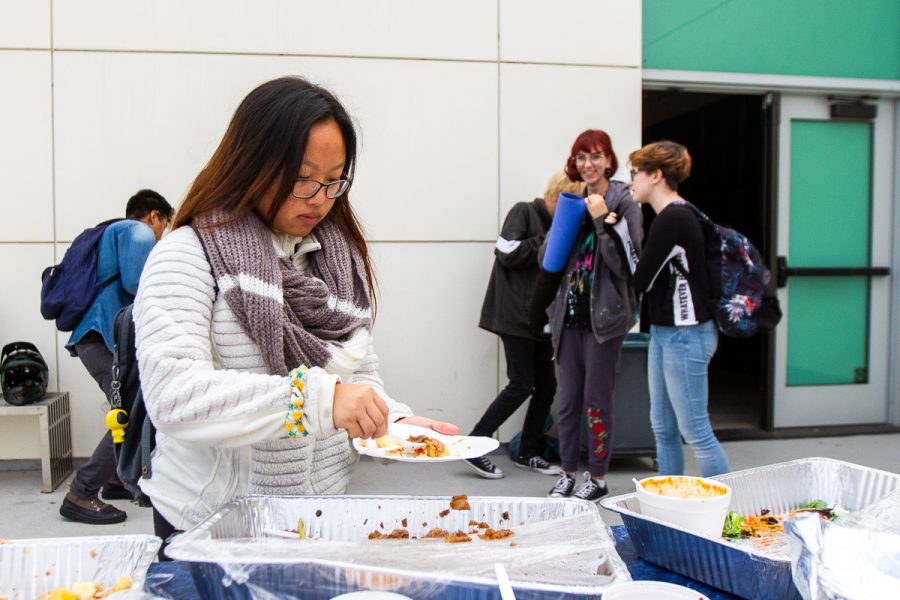 Valerie Moua serves herself food at the club mixer the Associated Student Senate arranged on Monday, Nov. 19, at the Atkinson Gallery at City College in Santa Barbara, Calif. The club mixer offered free food, and students had the chance to meet new people and find clubs to join.

Around 20 people were present when the event began, indulging in all the free food offered such as rice, several types of meat, tacos and bite-sized cupcakes.

Emma Wolfgram, a member of The Ethnic Studies Club, said the club recently played a role in a big change in local high schools. The Santa Barbara Unified High School District recently voted to approve making ethnic studies mandatory in the school district, and Wolfram said members from the club voted in the matter to help the petition pass.

Damian Clogher, Futurism club president said the club aims to educate people about futuristic technology that might someday be available to the public, adding that students should join the club to get a better feel of what is waiting around the corner.

Computer Science Club member Daniel Rojas also attended the club mixer. He said the club is open to everyone, even art majors, and offers help for students taking computer science classes They also sometimes arrange game nights where the members meet and play games together.

Armando Huerta, a member of the Anime club said said that many people are ashamed to admit to liking anime but he feels they shouldn’t be. He thinks everyone who has an interest in Japanese cartoons should join the club to meet like-minded people and discuss anime.

Not everyone who attended the event was a part of a club. Students Ilias Kyriakidis and Lilli Eskes said that they found out about the event through social media and heard they were serving food.

“It’s a good way to spend time between your classes,” Eskes said.

“Since we are already here we might as well explore some new clubs,” Kyriakidis added.