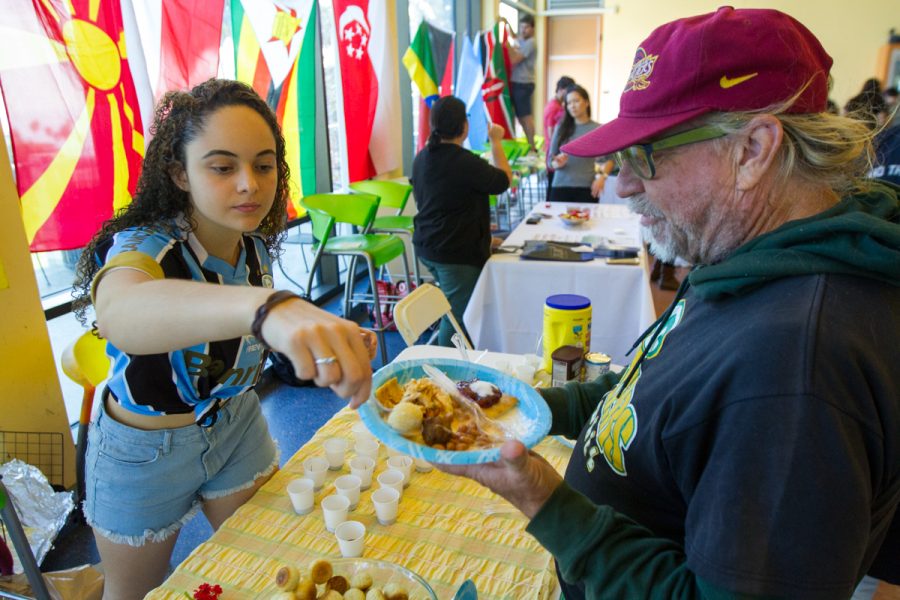 The SBCC Ambassadors and students from across the world came together in the East Campus Cafeteria, Friday, to celebrate the annual International food and culture fair.

When the students walked through the cafeteria doors they were met by flags, music and smells out of the ordinary.

Students and faculty attending the fair were taken on a culinary trip around the world featuring foods such as Austrian schnitzel and mashed potatoes, Finnish pannkakku (pancakes) served with strawberry jam, Greek pita bread with tzatziki, Thai style chicken with rice and Argentinian empanadas.

“We are here to represent international students and to raise cultural awareness” said Florentina Lang, SBCC Ambassador from Austria.

City College student Simone Warnecke, originally from Austria, said she was happy Austria has a booth this year because last year they did not have one. “I have never had schnitzel with mashed potatoes before, I usually eat it with rice,” she said.

However, the Austrian booth was not only representing its country’s national dish, the schnitzel, they were also there to spread the word about the opportunity to study abroad in Austria in the Summer of 2019.

“I like the food fair because I feel like it is uniting people from different places and different cultures,” said City College student Isabelle Abe. “And the food is good too, I like to try new foods,” she added.

Finland was among the booths with an interesting anecdote tied to its dish, offering visitors an insight on how they make their pancakes. Instead of frying the pancakes in a pan, the Finnish people make their pannkakku in the oven.

Another way that the Finnish pannkakku differs from the American pancake is that they don’t eat it for breakfast but rather for dessert, said Julia Lastikka, SBCC Ambassador from Finland.

Sara Nilsson, a student attending the fair, said she was a little disappointed because she was expecting more than one dish from the different countries presented, and in the future hopes that the food fair can be even bigger and include more foods.