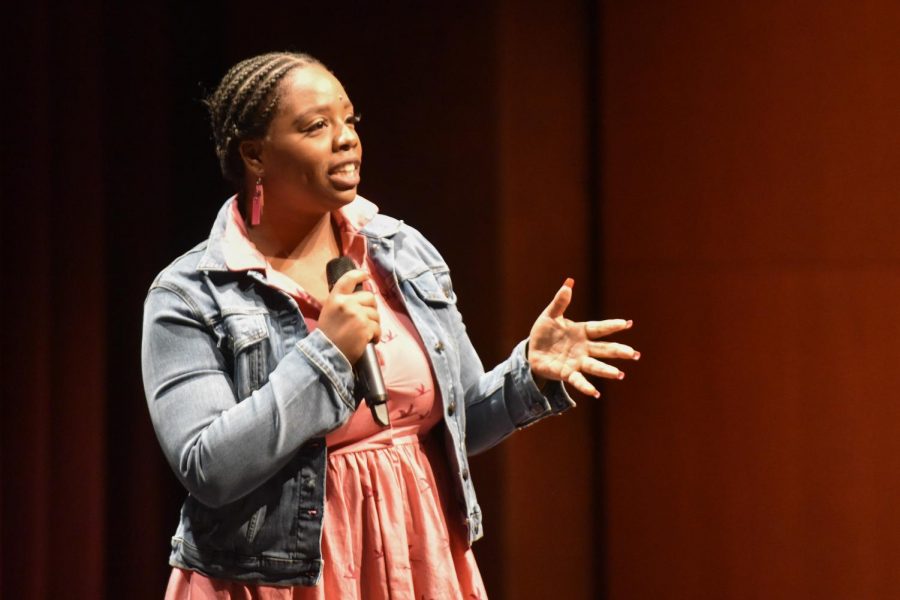 Patrisse Cullors speaks about her role in the Black Lives Matter movement at the 28th annual Leonardo Dotantes Memorial Lecture on Thursday, Nov. 15, at City College in Santa Barbara Calif. Cullors started the hashtag #BlackLivesMatter and has been an outspoken activist for racial equality.

In a jam-packed Garvin Theatre Thursday, the co-founder of the Black Lives Matter movement  Patrisse Cullors educated the audience on the importance of organizing and coming together as a community to combat racism.

She began by recalling the story of her 19-year old brother being beaten brutally while in a county jail, so badly that he blacked out and was later denied medical treatment for his injuries.

Cullors explained how she came across the Trayvon Martin case, where a 17-year old was shot in his own neighborhood by neighborhood watchman George Zimmerman. She said that she was scrolling through Facebook when she found a small article about what had happened. She immediately went to check other news sites and was shocked to see that it had no coverage elsewhere.

She followed the trial until Zimmerman’s acquittal in 2013, taking to the internet yet again to understand how this could happen and why. She said that during that period a friend had posted a “love note to black folks,” that ended with the phrase black lives matter.

“I remember seeing those three words and I was like ‘that’s it, that’s ours, that’s what we’re going to use,’” she said.

She said that she predicted that putting a hashtag in front of it would help it go viral.

Within 48 hours Cullors and her longtime friend Alicia Garza had turned the hashtag into a political project that now has 40 chapters all over the world.

There was an opportunity for questions, a City College student from the audience spoke up about her struggles at the college and asked for advice.

“I wanted some advice about being a black student in a majority white school,” said first year student Nia Revis. “We’ve experienced a lot of struggles here, like being harassed on social media, being called monkeys, go back to Africa, being called n-words in the library, several things that we’ve gone to the administration with, trying to get support from staff behind us, we’ve been working on ways to control that. I just want to know personally what you think we should do. I feel like I’m in a box and I’m just so angry.”

Cullors said she ran into the same problem of minimizing black struggle in the first year or so of the Black Lives Matter creation. Many in her community questioned the decision to focus on black lives, others wanted to try and use the phrase for themselves. They were able to use this period of time to keep organizing and creating a movement that moved from the internet to the real world, and have colleges, corporations, and organizations using the phrase.

Cullors said that the Black Lives Matter movement was not only for African-Americans, but for black people all over the globe.

“We actually wanted to challenge black people in this country to think about black people around the world,” she said, “And that anti-black racism is actually a global phenomenon.”

Cullors explained that due to this world wide spread of anti-black racism, places like Canada, the UK, and South Africa have opened chapters of Black Lives Matter.

“I remember telling people we’re in a state of emergency and if we don’t shift the way we’re relating, much more damage is to come,” she said.

Cullors said that the two years following the 2016 election have been both devastating and inspiring.

“I have watched the rise of a political movement over the last 5 years, of some folks who thought they’d never show up for a protest,” she said.

Cullors reiterated that now is a time for organizing, and that her goal for the talk she gave was to inspire students to organize and come together.