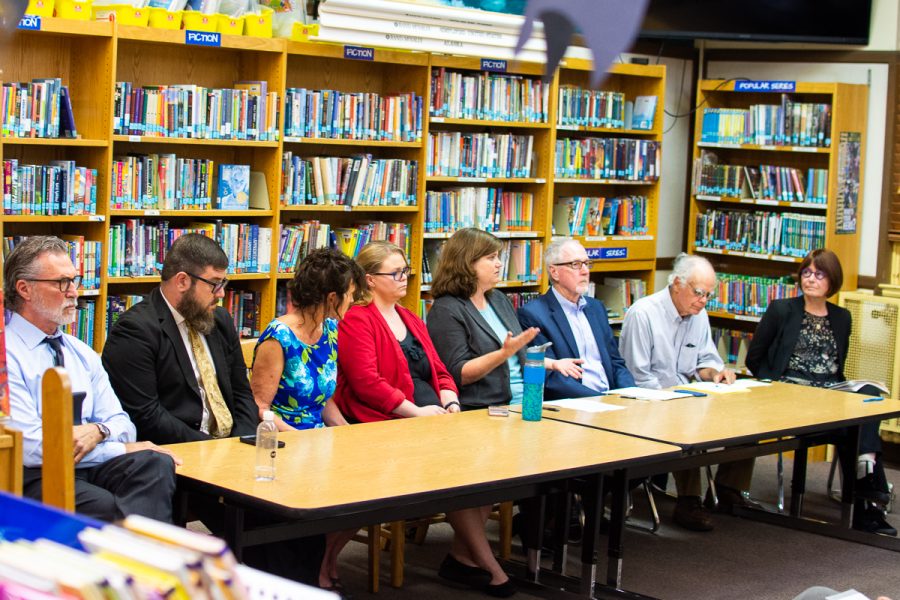 The housing crisis came to the forefront of the Board of Trustees races Monday night in the only scheduled forum for the candidates before Election Day Nov. 6.

All seven trustee candidates running for contested positions attended the event, which comes at a time when the college is grappling with issues ranging from allegations of administrative negligence to the college budget deficit and the issue of more affordable student housing. It was held in the McKinley Elementary library and featured retired City College political science teacher John Kay as the moderator.

A member of the public who has lived in the area for over 30 years, Sue Millor, questioned District 5 candidate Darcel Elliott  about how she wants City College to house 7,000 out-of-the-area students, asking her about where the housing would be and how it would be paid for. She was concerned that not enough resources were going toward locals.

Elliott replied that if another multi-level parking structure similar to parking lot 5 was built near the Business-Communications Center, that would free up about three quarters of parking lot 4 for student housing. She added that it could be paid for through a bond or through partnerships with private developers, who would pay the building costs up front and be paid back through students’ room and board payments.

Although the question was directed at Elliott specifically, many of the other candidates used it as an opportunity to elaborate on their positions also.

Marsha Croninger, the incumbent for the District 5 seat, added that efforts to house students should center on the community’s most vulnerable, but should be limited to housing 100-150 students.

District 2 candidate Brandon Morse, who describes himself as a libertarian, said the college should focus on creating more online classes to decrease the need for students to be on campus. He also said the college should work on not being so reliant on the revenue from international students, who pay over seven times as much tuition per unit than in-state students.

Other issues the candidates spoke on included the current political climate, the college’s budgeting challenges, and how college members can better collaborate with each other.

“We need to navigate our way through this politically divisive culture…It is our challenge to learn how to talk to each other with respect and care for each other,” Croninger said.

District 7 candidate Kate Parker, who has served on the Santa Barbara Unified School District for the last 12 years, spoke in generalities when asked what the two biggest issues facing the college are.

“Student outcomes are really tied into the budget. From my 12 years of experience, I know the budget is always important, it’s always a driver, both in terms of what we can offer students and what we can do for our faculty and staff,” she said. “My second biggest issue is the interplay of City College with the community, which covers everything from student housing to infrastructure issues both outside of SBCC and on the campus itself.”

Another candidate for District 7, Daniel Seymour, who teaches in the MBA program at CSU Channel Islands and referred to himself as the “technocrat” in the room, was the first to elaborate on the college’s budget deficit and the new way state community colleges will be funded.

“We have a $100 million budget and no one mentioned the fact that it was $6 million upside down last year…compounding that is how California is going to performance-based funding,” he said, adding that forty percent of the college’s funding will come from performance-based criteria.

“I haven’t heard a word on how it’s going to be handled. It’s nice to talk about student success, but you have to have a plan to get there,” he said.

When the talk turned to how the candidates understood the concept of shared governance, the third District 7 candidate, Laurie Punches, admitted she had not heard the term until that very day when she was given the questions the moderator would ask. Parker, in contrast, referred to it as a “vague term,” but elaborated to say it was a collaboration between the trustees, faculty and staff to reach agreement on college issues.

Robert Miller, the incumbent for the District 2 seat, said actively listening to others was a critical aspect of all collaborations.

“The only way that things can work is through listening. Not just listening politely, but listening intently to understand what the other groups are expressing,” he said.

Morse said that apathy among City College staff and students is the major issue to overcome for there to be better collaboration among college members.

“It’s great to say we’re going to listen, but we have to actually encourage active participation for all the parties involved,” he said.

“I think it’s unfortunate that we have to be forced to do this by state law, as I believe that standing on principle is the best way to make a positive progression.”