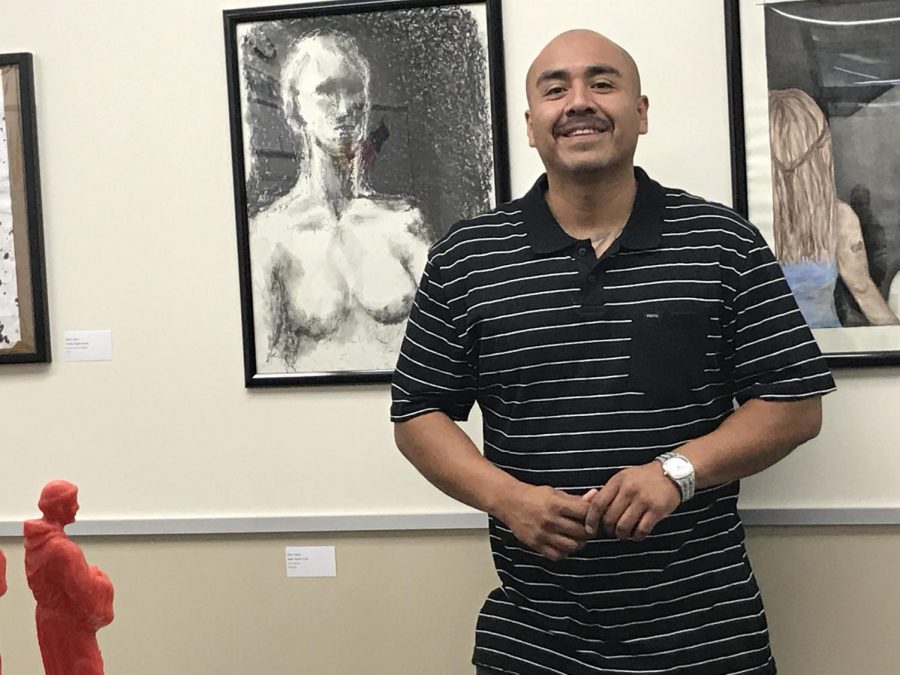 Commencement speaker Alberto Lule stands in front of his pop-up art show, “The Monster in my Closet” located in the Equity Center May 11, 2018. Lule was previously incarcerated and said he found a passion for art in prison, which lead him to obtaining three art degrees.

Taking college classes in prison helped City College student Alberto Lule realize that he wanted to pursue a higher education, and now Lule will be graduating City College with four associate degrees and speaking at this year’s commencement ceremony.

Lule spent 13 years in prison for charges surrounding gang allegations and drugs and is still on parole as of May 2016.

Lule first began taking college classes in prison, something not many prisons offer to inmates. He said that once he realized that he could understand everything, he felt that he wanted to read every book and learn even more.

“It lifted the wool off of my eyes,” Lule said. “The veil of ignorance was lifted, and I realized not only that I was smart, but also that I had a purpose, which was using my education to get out of the prison I had put myself in.”

Lule said a Philosophy 101 class really changed his mindset the most and made him realize who he was inside of his mind. Lule recommends that every student take the class because it promotes a different way of thinking that got him to where he is now.

Lule said students tend to go through difficult times in college. Joining a group or club is one of the best ways to understand oneself and other people and to realize that one is not alone.

Lule is a part of two different student groups that have helped him achieve success. He is the ambassador of the Underground Scholars Initiative at UC Berkeley that helps formerly incarcerated students enter into college life.

He is also a part of a club on campus called Still I Rise, which allows students to express themselves and their struggles in college through writing.

“Let me tell you that in every single meeting someone ends up falling apart, but it’s so beautiful and healing that you leave the group with a recharged stress battery,” Lule said. “Sometimes you just need a shoulder to cry on for an hour.”

Lule will be graduating with associate degrees in studio art, art history, social behavioral sciences, and liberal arts, and has been accepted into UC Santa Barbara, UC Santa Cruz, UC Los Angeles, and UC Berkeley. He plans on studying studio art and art history and said he hopes to work in a museum one day.

Lule described how he wound up being chosen as the commencement speaker.

“I went into the interview wanting it and giving it my best shot,” he said. “Sometimes if you keep a positive attitude and speak with an open heart, opportunities that you never expected will open up for you.”
Lule will be speaking at City College’s commencement ceremony at 5 p.m. Friday, May 18, at La Playa stadium.