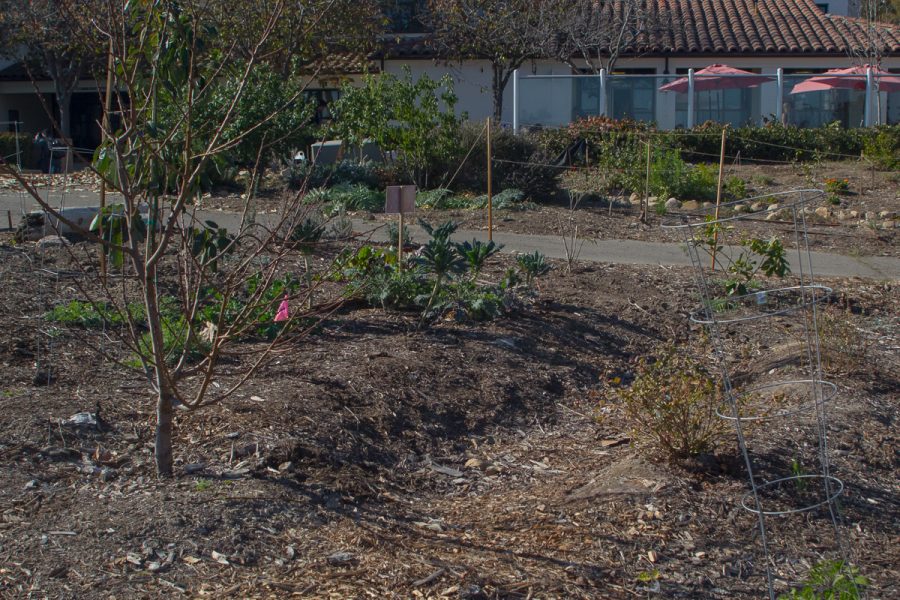 The garden is one of many sustainable locations that City College has installed. It is located outside the City College West Campus Cafeteria.

With the creation of City College’s first Sustainability Workgroup, the college now has a team dedicated to coordinating the efforts of the numerous sustainability groups on campus.

In September 2014, campus leaders banded together to create the first document in City College’s history to unite sustainability initiatives under common goals, giving life to the City College’s District Sustainability Plan. However, no one group had existed to act as an organizing body to lead the campus’ sustainability efforts until the Sustainability Workgroup was formed, according to Lyndsay Maas, vice president of business services.

Although there is still much work that needs to be done, a substantial portion of the plan’s five overall goals—to substantially reduce waste, increase energy-efficiency, decrease water usage, reduce single-passenger commutes, and provide more vegetarian meals on campus—have been accomplished since the plan’s implementation.

In regards to campus waste, 100 percent of all food scraps leftover from meal preparation in the cafeteria are now composted. A comprehensive waste audit has also been completed to identify what types of waste are and are not being diverted from landfill.

Unfortunately, the campus only has a single composting bin for consumers, located in the cafeteria. Furthermore, the corporation that collects the college’s compost, Marborg, has a policy of not composting the contents of a compost bin if it is contaminated with 1 percent or more of items other than food, such as plastic.

According to Adam Green, professor of environmental studies, we may not even be including the contents of the bin into the college’s larger food compost bin which is collected by Marborg—it is possible none of it is being composted most of the time because of how contaminated the bin usually is.

“This is one of the most challenging areas of waste diversion for us and everyone else,” Green said.

Student groups such as the Energy Collective Club and the Student Sustainability Coalition have taken the initiative to build a number of renewable energy powered projects, including two phone-charging stations within the last three years. City College also has installed solar panels on West Campus that generate about 10 percent of the total energy the District uses.

One of the largest obstacles yet to be overcome for the college to become more energy efficient lies in the cost of installing energy meters for most buildings on campus. According to Green, each meter will likely cost several thousand dollars— perhaps as much as $10,000.

Although the total energy used by the campus is known (West Campus and East Campus each have a single meter that measures their total energy usage), the college does not know how much energy each specific building is using, so it is difficult to determine how best to proceed with energy-efficiency efforts.

On the transportation front, the college is encouraging a switch from single passenger commutes to commuting more sustainably through a program where college employees can be paid $2 per day (maximum of $40 per month) by the college for not commuting alone by car. Instead, the program asks people to commute using one of its approved methods of transportation, such as bicycling or carpooling. Unfortunately, student workers are not eligible for this particular program—but there are other programs students can join to reward them for commuting more sustainably.

These incentive programs, as well as the opening of a branch of Bici Centro at City College, has helped to increase the number of people who ride their bikes considerably.

“I feel that Bici Centro has really increased the number of bikers on campus because people now have a place to repair their bike on campus and purchase gear,” said Sergio Garcia, who manages Bici Centro’s City College branch during school hours. “Before Bici Centro came, you would not have seen as many bikers on campus as you do now– now they’re everywhere.”