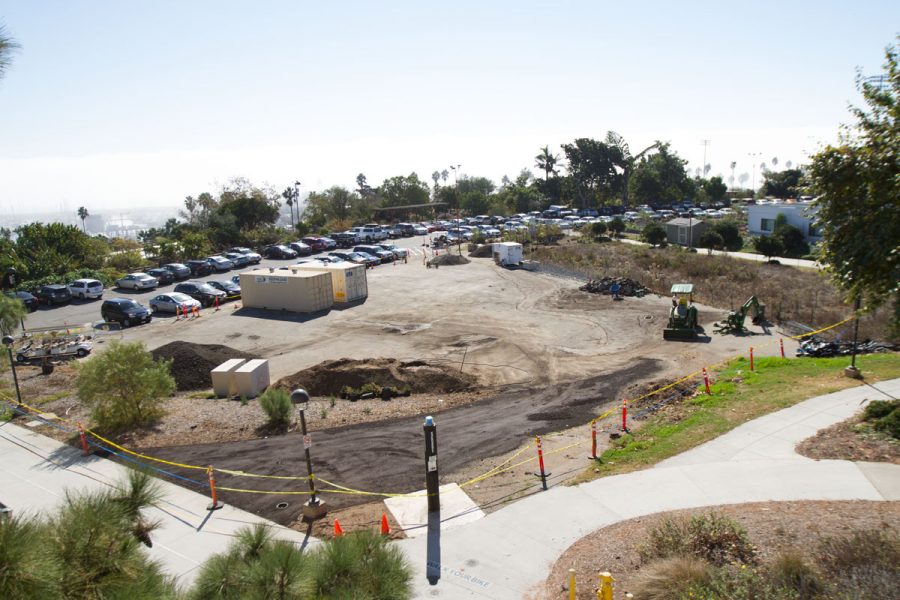 Construction zone where the old portable classrooms used to be Friday, Oct. 27, on East Campus. Plans have been made to reserve the area for the geology department’s bus, new bike racks, a picnic area and succulent plants like cactus.

City College plans to repurpose its East Campus vacant lot by late November, giving the space to the geology department and emergency operations.

With the old portable classrooms out of the way, City College made plans to reserve the new East Campus corner for the geology department’s bus and equipment truck, nicknamed “Woolly.” The new area will also include more bike racks, a picnic area, and a whole host of succulents that will match the ones across the street in the bio-restoration area.

“Yeah, it’s gonna be so nice, man,” said Mark Broomfield, operations manager for City College. “It’s always kind of been the backside of the moon there. It’s so far from Central Campus and the Main Campus entrance, but now that we’re having more and more traffic come into the Humanities Building, that’s a spot we want to get looking really nice.”

Broomfield said Mike Gonella, director of the horticulture program, approached him with the idea of growing and transplanting a variety of succulents to match the bio-restoration area on the other side of the road, which has a desert cactus theme.

“We’re gonna take all those plants we’ve been growing and match those two sides up so it looks like a more formal entrance, really give it the respect it deserves,” Broomfield said.

The new area is going to feature jades, agaves and aloes, all of which will help provide a class-learning opportunity for the horticulture department, and for classes on propagation and greenhouse management.

Lyndsay Maas, vice president of business services, added that moving the geology department’s equipment and meeting area to the renovated space will create a much safer dynamic for students.

Currently, geology’s bus and equipment truck are parked near the Earth and Biological Sciences Building, an area that sees a lot of delivery truck traffic for food services, Maas said. By moving geology’s location to the new area, it will be much safer for students when they meet for trips.

Because the new geology parking location will be close to the City College’s emergency preparedness container, it will double as the campus emergency operations area. In the event of an emergency, the location will become a staging area where supplies and food could be handed out.