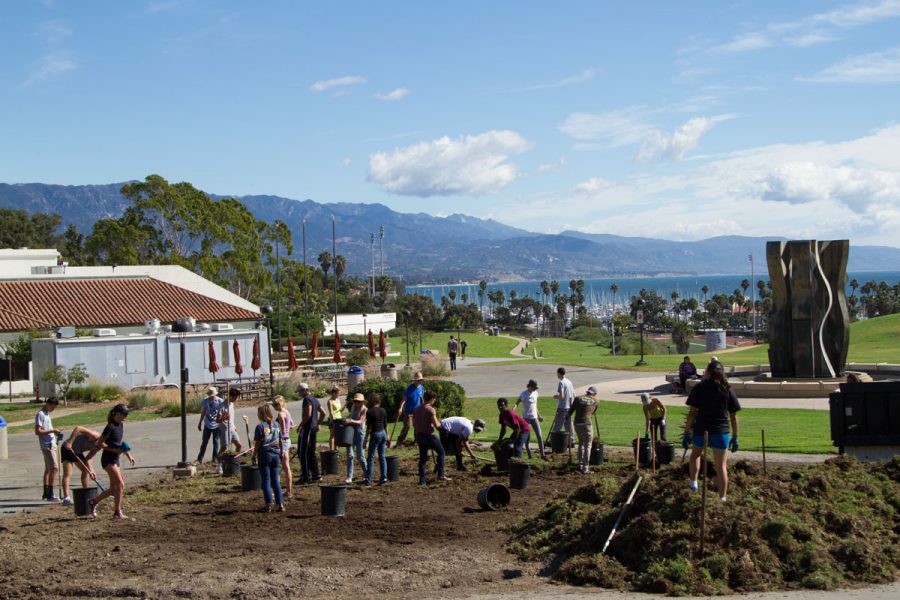 The first Permaculture Garden workday 9 a.m. to 4 p.m. Friday, Oct. 20, on West Campus. Volunteers tore up a plot of land in order to plant native flowers that will attract pollinators and help the garden grow.

Winds blew over several students, staff and our college President as they dug their shovels into areas of the West Campus Lawn. Students tore out patches of grass before replacing it with mulch. Both a food garden and a pollination garden were being formed.

The goal of this project is to grow enough fresh fruits and vegetables to donate to the City College food pantry.

Professor Adam Green assigned his Projects of Sustainability class these series of work days. He was pleased by the turnout of the day.

“With what’s going on in the world today, to be able to come out and get your hands dirty and do a cool project that makes the campus a little bit more sustainable, natural and be able to look back on it is great,” Green said.

Green explained that this idea started after a project he once assigned to his students. His students found that there is roughly 500,000 square feet of lawn at the college, but only half of that was being used by anyone.

Part of the District Sustainability Plan is to take the lawn and replace it with things that would require less water and maintenance for food production. The mulch being used to replace the grass was donated by Progressive Industries. The reasoning for the grass removal is that the lawn is invasive grass which means that it isn’t something that was planted.

Sarah Miles, one of Green’s freshman students, has been promoting the event. Miles said that the goal is to finish this by the end of the semester. The pollination garden is for things like hummingbirds, bees and butterflies to join our campus and start the process of pollinating our land.

“It’s really great for students to get active…and also just to get pollinators into this garden because I mean it’s already flourishing, but it’s still in it’s early stages, but anything we can do to help is wonderful,” she said.

Not only is this project of students about getting their hands dirty, but the end result of this is that the hundreds of students using the food pantry will be getting fresh fruits and vegetables.

Jackson Hayes, two year coordinator for the garden, talked about the steps the food needs to go through before it can be donated. Hayes explained that the recycled water being used needs to be checked for traces of pharmaceuticals and bacteria, but he said they may end up switching over to safe drinking water anyways.

After taking a break from the digging himself, President Beebe expressed his excitement about the project.

“What a great thing everybody’s doing,” he said. “This is fantastic. We’ll have peppers, tomatoes, strawberries and corn.”

Students from other classes were there to offer their time during the work day.

“I think it’s really cool that a lot of people showed up because it’s definitely a lot of work,” said Biology major Felicia Tetz. “If we had two more classes to help us volunteer we could get this done so much faster.”

“It’s really cool knowing that once it’s finished you had a part in getting done,” said Biology Major Kiana Pisula. “We did it.”

It’s advised to wear comfortable clothing at this project. Snacks and water are offered for the long day of hard labor for creating a more natural and colorful campus. This project changes the face of the campus while also helping out the Food Pantry.