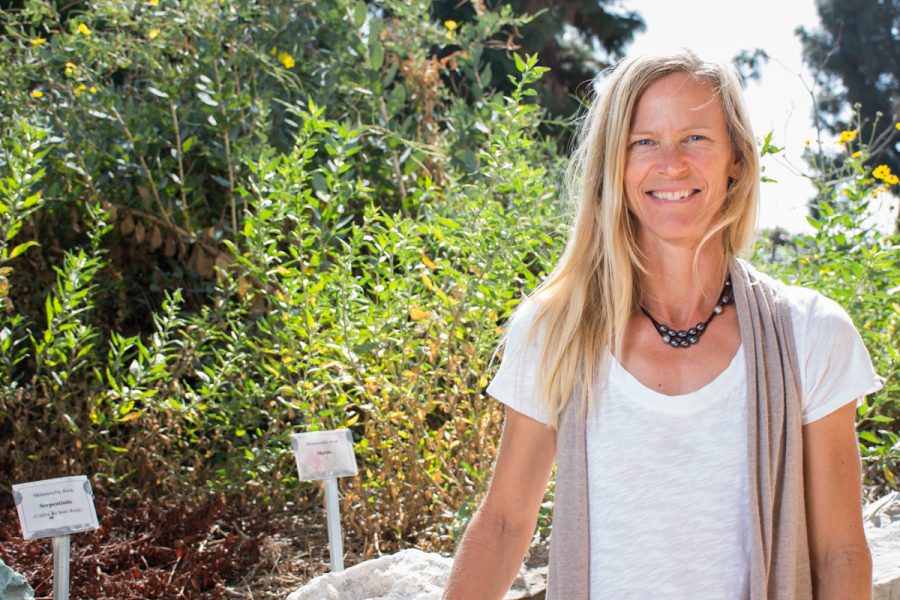 Geologist and administrative assistant Elizabeth O’Black Gans outside the Earth & Biological Sciences building Thursday, Oct. 19, at City College. “I got interested in Geology because I took an introductory Geology class and just loved understanding more about the world that I live in and the earth science that surrounds us.”

After over three years of mapping with Gans’ former Geology professor and co-author, Dr. Arthur Sylvester, the pair will accept their award for “Roadside Geology of Southern California” Saturday, Oct. 21, in Seattle, Washington.

“Its pretty exciting,” said Gans. “I’ve never won an award professionally before, so it’ll be fun to receive it.”

Gans said her partnership with Sylvester began when she was a geology student at UCSB. She helped the university’s Earth Science Professor Emeritus with mapping projects, and continued to do so when she graduated.

“When he started this project he realized he was going to need some help making maps,” she explained.

“It’s really complicated,” Gans told The Channels in a previous article. “It’s a huge area and there’s a lot of highways. They needed the right person who has had a lot of exposure to the geology in Southern California.”

Gans said making the book entailed finding the right geologic base map and then cutting out the chunks needed for each of the road log sections.

She said they often worked with google maps to pull the roads and geographic features that they were interested in. In order to avoid making the book too overwhelming and busy, they had to exclude a lot.

She said they then combined those two maps and did extensive customizing, styling and editing to make it exactly what they wanted.

The 400-page book includes 117 maps and illustrations, and 193 photographs. The book is designed for curious travelers driving along California’s road systems to read about geologic features as they pass them.

Sylvester said that there was a need for a comprehensible and readily available roadside guidebook in California.

“On a trip across the Mojave Desert in 2013, I guessed I knew enough about the geology there that I could write a ‘Roadside’ book,” he said. “Once I started writing, I realized I would need a decade or two just to do the maps and illustrations — so I was exceedingly fortunate that Libby agreed to do all of that exacting work with me.”