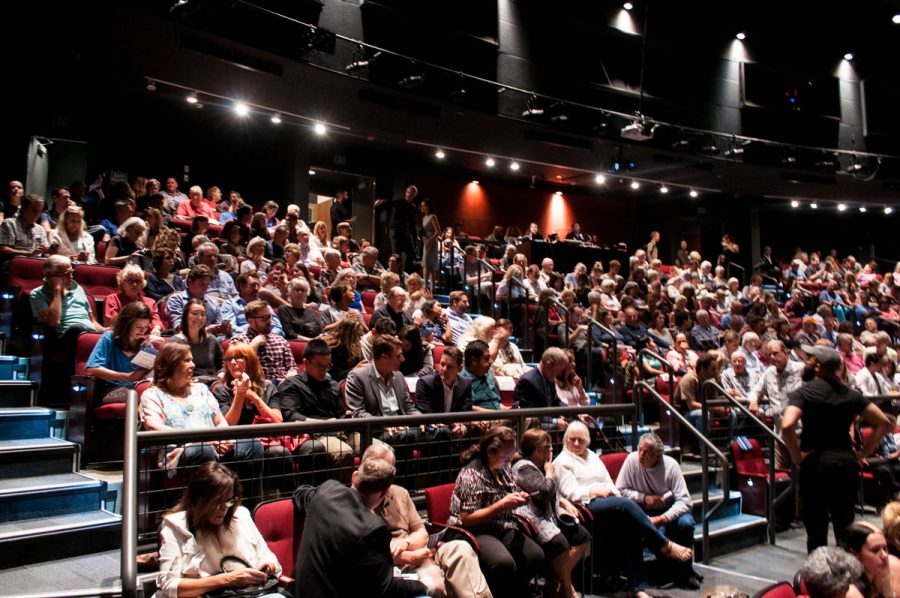 Five candidates running for mayor of Santa Barbara took the stage at yesterday at the Garvin Theatre for a moderated debate hosted by the Santa Barbara Independent and local radio station KCRW.

The debate began at 7 p.m. and lasted for one hour. Moderators Nick Welsh of the Independent and Jonathan Bastian of KCRW picked the brains of the candidates, revealing their position on a number issues facing the city.

Hal Conklin is leaving political retirement after serving four terms and as a city council member and a year as mayor.

Frank Hotchkiss has served the city council for eight years. The registered republican acts as a counter weight to other more liberal candidates.

Cathy Murillo, the only woman running for mayor, formerly wrote for the Santa Barbara Independent and was the director for KCRW. She is an active council member for the city and holds the endorsement of the Democratic Party.

Political outsider Angel Martinez was the CEO of Deckers Brand, a shoe company famous for its “Ugg” boots.

Bendy White is the last of the five candidates running for the office. White has served for numerous water councils and committees focused on the drought.

The five opposing candidates are as diverse as the community and reflect myriad of problems it faces.

All the topics covered in the debate orbited around the central idea: how to revitalize the city without losing the beauty and integrity Santa Barbara is known for with the questions asked focused on social and economic problems.

The first volley of questions were aimed housing primarily around downtown. While the candidates had a different approach they all agreed, more housing means more business.

Hal Conklin said that we need to, “come to some compromise to get it done. [If] you can put a thousand people in downtown and it will dramatically change. There wouldn’t be people sleeping on the sidewalk in front of stores.”

Introducing the topic of homelessness shifted the debate from housing to economic and social issues the city is gripping with.

On a question of clarification, Conklin was asked to state his position in regards to homosexuality and abortion.

“Most – many people [in Santa Barbara] agree with the view of the Catholic Church,” he responded. “So for me the only thing it actually calls for me to adhere to are the gospels, everything else is a recommendation.”

The debate returned to downtown but focused on homelessness. White explained that the “Big Bang” that started this began with Reagan as Governor in California, when he shut down numerous state mental institutions to curb state spending.

All but one candidate agreed that our current efforts weren’t enough and that state intervention from Sacramento is needed.

In opposition to the majority conservative Hotchkiss explained that, “There are a lot of people who choose to live on the streets. It’s true. I knew a guy who lived in oak park. There’s travelers like a couple with a dog standing on the street and they don’t want any help we have to offer.”

The audience responded with a deafening boo and after quiet returned to the theatre the questions resumed.

Moderator Bastian proposed a question of parody to Martinez, saying that businessmen [like Trump] don’t always mix well with politics.

Martinez quipped that, “Trump dictates with a silver spoon in his mouth and that’s not how it works in a public company

“Santa Barbara is not a business but… collaboration is a critical part of success.”

The final round of questions covered the states passing of recreational marijuana. They agreed that the voters have spoken quickly fell in discord over how to implement the new law.

“We have to follow what the voters want,” Conklin said. “It’s not as easy as putting a tile roof on the store and putting it in Santa Barbara.”

Murillo connected the dots from the other candidates, tackling the issue downtown business and marijuana.

“I think we should look at State Street because kids don’t walk the storefronts to get to class,” but warned that, “we really do need to regulate it. I’m not much of a gardener [but people] should be able to grow their marijuana inside or outside.”

The debate concluded with a statement from each candidate lasting for 60 seconds. They thanked the hosts and the voters for coming out. The polls are vote-by-mail, and will be available on Nov. 7.