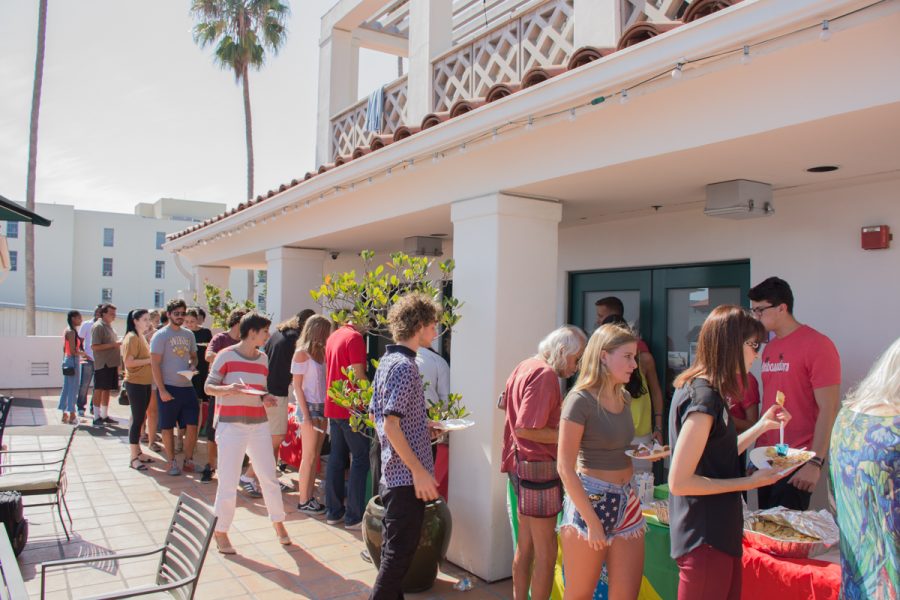 The SBCC Ambassadors took students on a culinary trip around the world at the International Food Fair on Friday, Oct. 13.

“What better way is there to gather people than over food?” Ambassador Jamela Adam said. “We’re having this event to gather international students and American students.”

Adam was representing Germany as she proudly served kartoffelsalad and small sausages for anyone interested.

Finland, Brazil, Ecuador, China, and Morocco were also being represented by flags and ambassadors in red t-shirts at the fair.

If not for Antioch University’s rooftop patio overlooking State Street, the red-tiled houses and the Santa Barbara mountains, the students might as well have been back in their home countries.

Admission was free even though it was a fundraising event for Rwandan students. Donations went to one student in particular, Valen, in order to pay for his education.

Luis Giraldo, director of equity, diversity and cultural competency, announced over a loudspeaker that the International Student Office would later double up any donations.

City College student Carly Talhami kept an eye on her neatly organized Study Abroad stand as she went to try out some delights.

“Everything is really good, but the Turkish cheese balls are the best,” Talhami said.

Antioch University also had a table where students could ask questions, meet with transfer advisors and get a tour of the campus.

Ambassador Faris Aboukeshim described some of the other events the group has organized for the semester.

“We have a barbeque coming up, a pumpkin carving event for Halloween, and a thriller event too,” he said.

The pumpkin carving will be on Oct. 25 and the recruiting barbeque Nov. 9.

The ambassadors’ latest event was a volleyball tournament at West Beach where students formed teams and spent the morning bonding and playing.

SBCC Ambassadors are recruiting new members until Oct. 22. Application is via their Facebook page. The ambassadors are active users of Facebook, which is where they promote upcoming events.