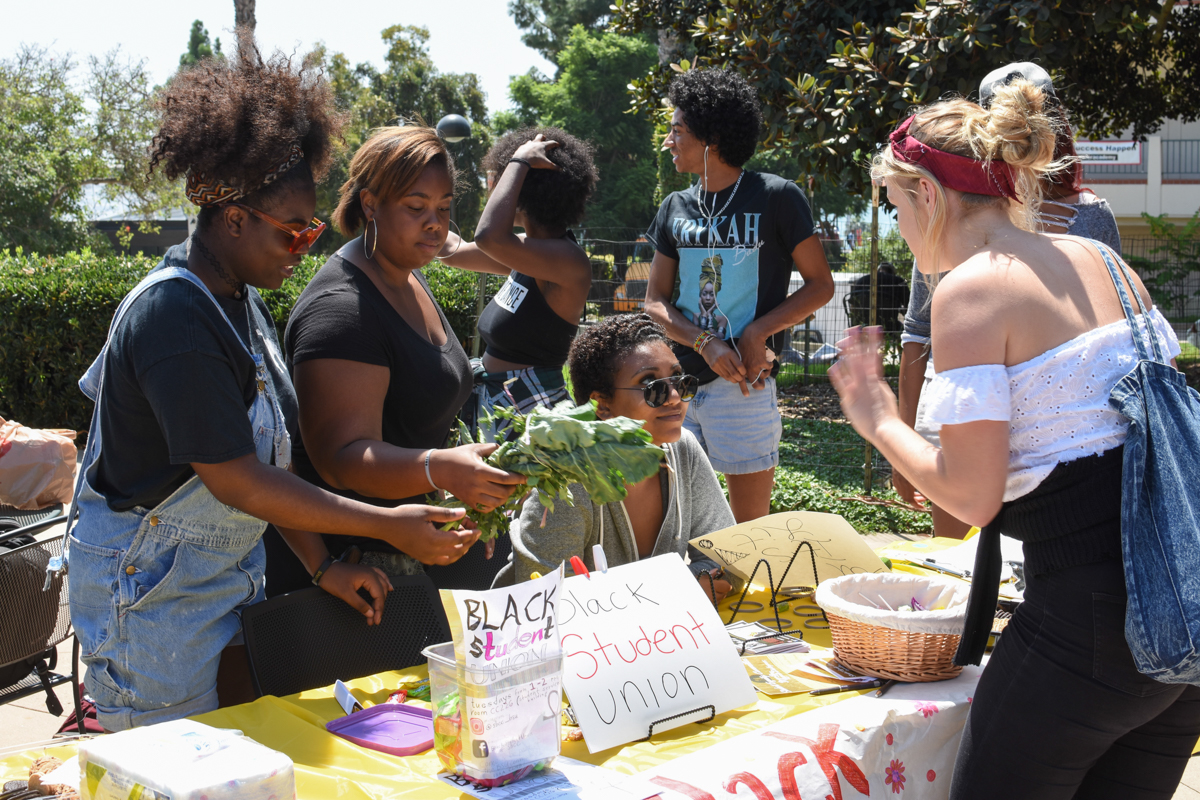 From left, Saturne Tchabong, J’Naer Bradford, and Tedenekialesh Debebe talk with a student about their club at Friendship Plaza on Sept. 6. The Black Student Union recruits currently enrolled students who are interested in Black History.

Select members of City College’s Black Student Union will be taking a trip to Howard University for its 150th homecoming on the weekend of Oct. 20.

Under funds by the Equity Committee and the SBCC Foundation, eight students are going to the historically black private university in Washington D.C for a weekend full of football and tradition. Alumni and visitors will gather to watch the Howard Bison take on the Morgan State Bears.

“It’s just a good experience for black students who live in a predominantly white community to be exposed to this,” said Krystle Farmer, Associated Student Government student advocate and Black Student Union member.

“The impact of seeing more people that look like you successfully doing what they’re doing is very powerful.”

Farmer said that the Black Student Union focuses on impactful ways to help black students— to provide an opportunity to expose them to their culture, life and an educational aspect to inspire them to succeed and transfer on.

Saturne Tchabong, Black Student Union president, presented the homecoming trip idea after creating the vision over summer when she spoke with some friends who attend Howard. Their idea came to life as the leadership team started making proposals and working out a reasonable budget.

Black Student Union leaders held an interview process to be considered for the trip and put a team together with an advisory board to review potential travelers. Students had to give multiple separate three-minute presentations, and then participate in a two-minute Q&A session after. The advisory board then deliberated and chose candidates based on that.

The process was open to all Black Student Union members, and open to black students who are unaffiliated with the club. The advisory board made sure to choose students who would appreciate the opportunity the most.

“In the black community, there isn’t really a high rate of us doing very successful in academics,” Tchabong said.

“At Santa Barbara City College, we are actually the lowest performing students on this campus. With knowing all this knowledge, I needed to do something to really, I guess, kickstart a drive in the black students in this campus—to form a community and to show them what a big black community of very successful, motivated, ambitious, educated black people looks like. What better place to do that at one of the top-ranking Historically Black College/Universities in the country.”

At the homecoming, there will be an Annual Greek Step Show. The history of step is significant in African American culture, which many people in California and the West Coast aren’t exposed to, Tchabong said.

There will also be an Afrocentric fashion show. It will consist of African-influenced clothing where a lot of the clothing are student-created clothes, said Tchabong.

More Howard events over the weekend will include tailgates and the Lavender Reception, a dinner where they’ll be discussing issues within the LGBTQ+ community, specifically within the black community.

Black Student Union hopes to make this a yearly trip and to be able to bring more students.

The foundation will be funding the hotel, travel, and travel expenses. Students started a GoFundMe for extra needed money, including money for food, travel costs for Lyfts and spending money for activities including traditional events.

A previous version of this article referred to the SBCC Foundation as the Santa Barbara Foundation. It has been updated to correct the error.