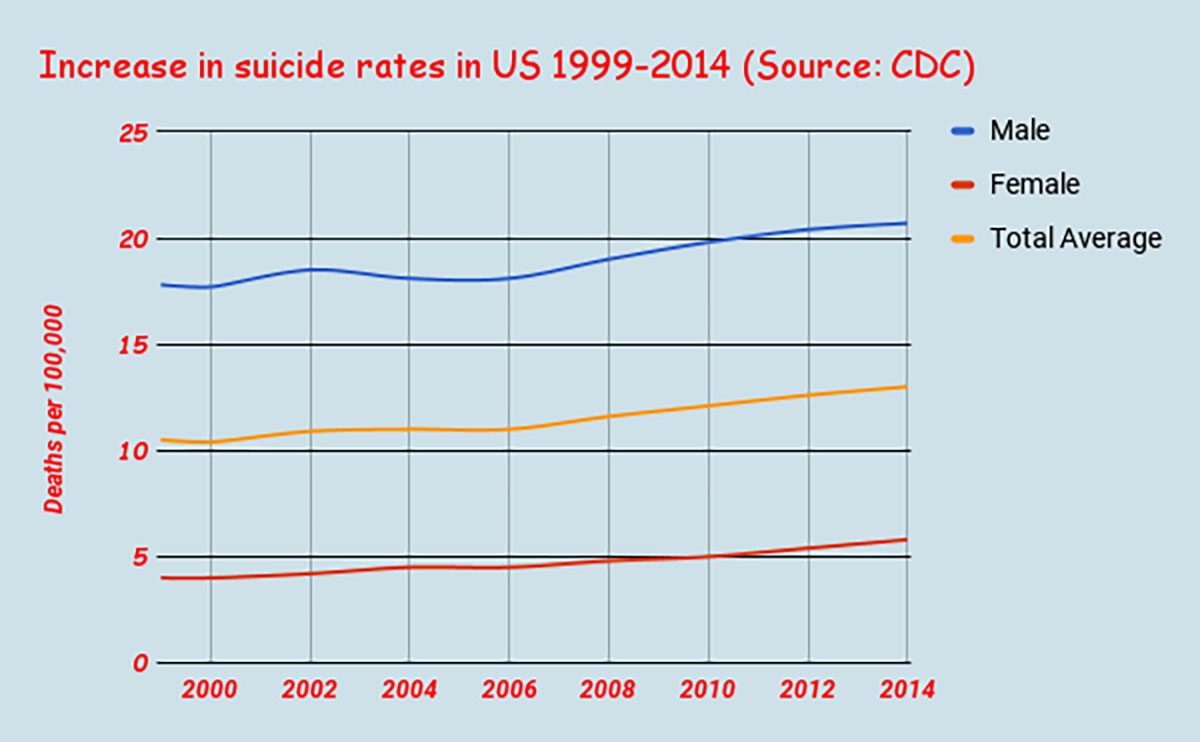 Increase in suicide rates in the United States from 1999 to 2014. Suicide rates have had a greater pace of increase since 2006. (Source: CDC)

City College Student Health and Wellness services have been highlighting the Crisis Text Line with a heavy emphasis this September, as it is National Suicide Awareness Month.

Crisis Text Line is a national organization that provides free access to mental health support and information through text messages if an individual feels as though they’re in a crisis. The organization defines a typical crisis as a moment of extreme emotional pain that gets in the way of living one’s everyday life.

All students can text the word “courage” to 741741 in moments of need. A trained counselor will respond to go through a de-escalating process, whether one feels suicidal or is having an anxiety attack.

The Wellness Connection, a student club and program funded by the Student Health and Wellness, provides safe spaces for students and on-campus events. Gavin Thatcher, Wellness Connection president, said he sees the importance in bringing up the topic of mental health.

“It’s important to me because there’s conversations that must be brought up,” Thatcher said. “And there must be awareness spread to campus. Not just the sources, but the connections that are beneficial to overall wellness.”

According to American Foundation for Suicide Prevention’s “Suicide Statistics” page, suicide is the tenth leading cause of death in the United States.

The foundation also states that:

Suicide is the second-leading cause of death among 20 to 24-year-olds.
More teenagers and young adults die from suicide than from all medical illnesses combined.
One in 12 U.S. college students makes a suicide plan.

Peters stresses that it’s important to know the warning signs of suicide.

Signs include an increased use in drugs and alcohol, increased anger, feelings of hopelessness, feeling no sense of purpose, feeling desperate, feeling trapped, reckless behavior, and changes in sleep.

If a student should encounter someone showing these signs, they should know to refer the individual to Crisis Text Line or directly to the Counseling Offices in Student Services Building Room 170.

“Mental health is slowly getting less stigmatized and students are becoming more comfortable talking about problems and this resource is a helpful tool,” Peters said.

At City College there are 11 personal counselors, including one bilingual counselor.