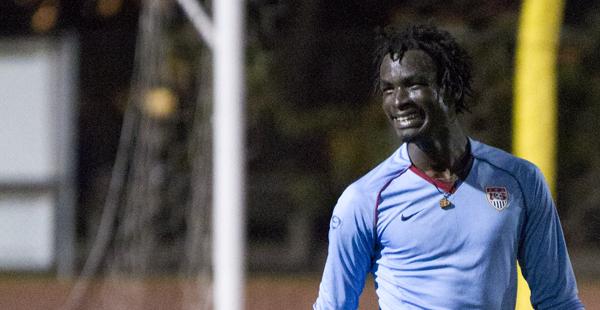 Kabogoza was paddleboarding with a female companion Saturday afternoon when he fell into the water at about 4 p.m. and didn’t resurface, Noozhawk reported. The San Luis Obispo dive team, which was training in the area at the time, recovered his body at the bottom of the harbor about two hours later.

“When I heard of his death, it really did upset me. I couldn’t believe it,” head soccer coach John Sisterson said. “It makes you wonder why these things happen. He was such a good guy, loved by everyone.”

“It’s a terrible loss to Santa Barbara and everyone.”

In his office in the Sports Pavilion, Sisterson has a small soccer ball that Kabogoza made with dried leaves and twine when he was 8 years old. Sisterson said in Uganda, the children don’t have any soccer balls, so they make them out of natural materials. He said that Kabogoza, who called Sisterson a “second father,” had insisted that he have it.

Kabogoza attended City College in 2012 and overcame many obstacles before coming to the United States. While living in Uganda, Kabogoza worked 12-hour days with no guarantee of pay and shared a one-room house with his mother, two brothers and sister.

He quit school at age 16 to work fulltime, but later finished his high school equivalency at 18. He got involved with Sports Outreach Institute, which aims to empower individuals through athletics, biblical teachings and job training.

On a bus ride to northern Uganda, Kabogoza later met Vicky Harbison, a Montecito Union School District teacher and board president for Turn the Page Uganda. The nonprofit aims to get books and school supplies for students and teachers in northern Uganda.

Harbison said in a phone interview that many factors about Kabogoza attracted her to him, including his politeness, generosity in donating his few shillings to a poor man at the market and his courage to speak in front of thousands about abstinence and sexually transmitted infection prevention.

She said that he reminded her of her middle son, who was around the same age and was a student at Berkeley, because he had a cellphone, was bobbing his head to the music and was wearing a scarf, just like the students at Berkeley.

“He was very charming, very athletic,” she said. “He had a love for all humanity.”

Harbison sponsored Kabogoza to come to the U.S. to continue his education at City College, where he was a forward for the Vaqueros men’s soccer team.

“He was a very positive person but again, very humble,” Sisterson said. “He was loved by everyone.”

Sisterson said that when Kabogoza visited City College in Spring 2011, it was his first time meeting him. He told Sisterson that he was a goalkeeper.

Sisterson said he was impressed with his athletics.

“[He was] a very good athlete, determined,” Sisterson said. “He wanted to strive and do well. That was important to him.”

Kabogoza attended Westmont University on a scholarship where he played soccer for the men’s team in 2013 and 2015. He graduated in June 2016 with a bachelor’s in kinesiology, according to a statement from the university.

Kabogoza volunteered as an assistant coach for the Vaqueros men’s and women’s soccer teams.

He also coached soccer at Laguna Blanca School, served as a media planner for Turn the Page Uganda and worked as a fashion model for Abercrombie & Fitch, H&M and Emporio Armani, according to the statement.

Kabogoza was also a blogger and wrote about topics ranging from dreams to seizing opportunities to his regret about cutting ties with his father.

“They say you don’t know what you have lost until it’s finally disappeared into thin air,” he wrote in a blog statement published April 20. “I’ve sat back and watched myself become a person who can accomplish everything.”