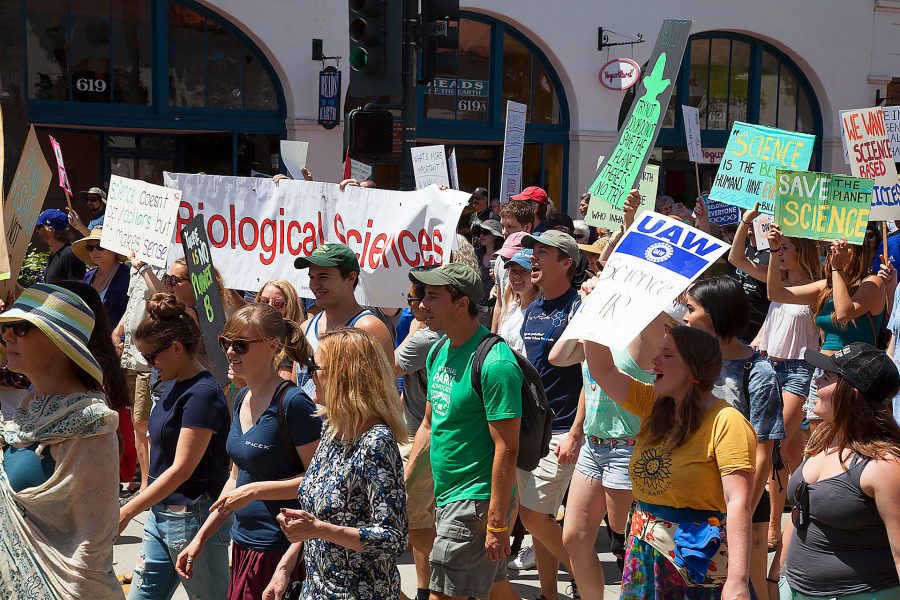 Thousands of passionate citizens flooded the streets of Santa Barbara on Earth Day in support of science and the preservation of scientific research.

This Santa Barbara localized gathering was one of over 600 globally recognized marches across nearly 70 countries appropriately named the “March for Science.”

Organized by City College students Jorie Mitchell and Hannah Armer, the event drew an estimated crowd of “up to 4,000 people” to downtown Santa Barbara, according to Mitchell.

After a series of speakers, including Hannah-Beth Jackson, California state senator, and Raeanne Napoleon, chemistry professor, the masses filled State St. to the brim for a two-mile march that stretched from De La Guerra Plaza to Alameda Park.

The route concluded at the Santa Barbara Earth Day Festival, which featured music, vendors, and the presentation of the Environmental Hero Award by the Community Environmental Council.

Napoleon concluded the series of speeches with a call to action. She believes that science is essential not only to those who study it, but to the citizens who rely on scientific research in every aspect of modern life.

“All of us across the globe are making it known that science is not something to mess with,” Napoleon said. “It’s important for all of us to realize that while we are defending science here today, and as we move away from the march, we must all realize there’s so much work to be done.”

Despite the march’s focus on celebrating the contributions of science, the politically charged atmosphere of the event was undeniable. Marchers carried signs denouncing the current presidential administration’s recent condemnations of science-based research and budget proposals to defund critical government agencies such as the Environmental Protection Agency.

Shelby Vexler, microbiology major at UCSB, voiced her concern with the future of her career after these budget proposals threatened her field of study.

“It’s scary to me because this is what I want to do for the rest of my life, and I might not be able to do that now,” Vexler said. “This is really important work.”

While a number of marchers were in attendance to protest the current administration, Mitchell stressed that the support of science does not cohere to a political agenda.

“This march is intended to be nonpartisan, as science is nonpartisan. The current threats to science affect everyone, regardless of political party,” Mitchell said.