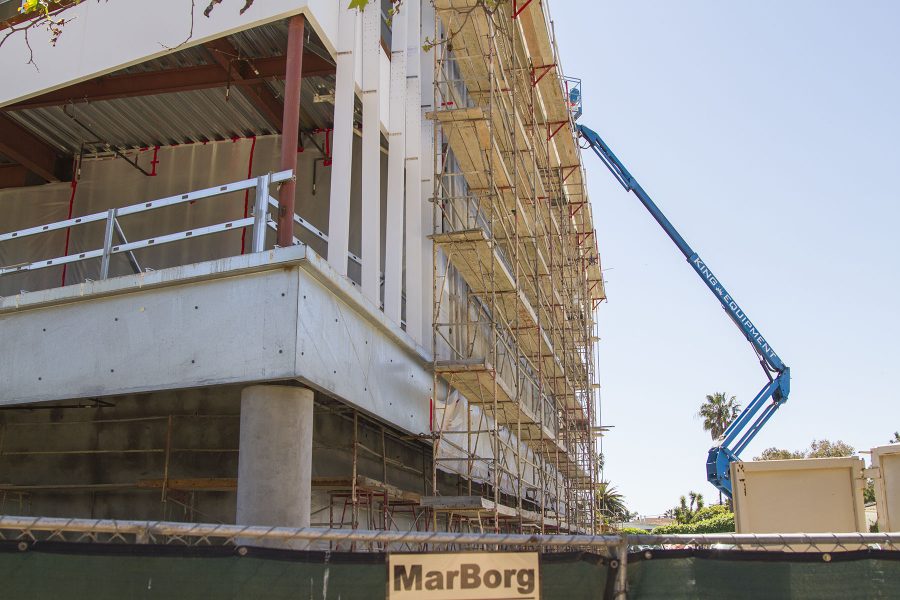 The West Campus building under construction on Thursday, April 20, at City College. The renovation will be complete next spring.

The West Campus building will open its doors next spring and will feature a satellite Student Services Office, an Equity Center and a space for students to hang out.

In 2008, City College received $77.2 million to improve its facilities from bond measure V. The funds have been used on a number of projects from a new track and field to a modernized Humanities Building. In 2012, the Board of Trustees approved the West Campus building project and started construction in late 2015.

A new satellite Student Services Office will be located on the second floor of the new building. It is expected to make it more convenient for students to access when on the other side of campus.

“Anything you can get out of the student services building, we’re going to try to put some element of that in one of the rooms,” said Kenley Neufeld, dean of educational programs.

There isn’t enough space in the new “one-stop shop” to incorporate a part of every student service. However, the new room will likely have at least a Counseling and Assessment desk, according to Neufeld.

The Student Equity Committee will be getting a home on the second floor too. Called the Equity Center, the new room will serve as a multicultural hub for the campus.

“The space itself is going to be a place where we hold workshops, meetings, and events,” said Luis Giraldo, director of equity, diversity and cultural competency.

As construction carries, there are two walls missing from part of the second and third floors of the building. Those areas will be student common spaces, which will overlook West Campus and the Great Meadow.

“That’s going to all be glassed in,” said Dr. Paul Jarrell, executive vice president of educational programs. “Each one of those spaces might hold around 15 to 20 students.”

There will also be some student gathering space on the second-floor balcony. The balcony will have a similar capacity but, instead of overlooking the West Campus, it will give students ocean views.

Lastly, the building will also have 20 classrooms and one lab for social sciences. The Social Sciences division will be taking at least seven of the new classrooms while American sign language, addictive disorders counseling, English, math, film studies and justice studies will take one class each. How the remaining seven rooms are used will be up to the Scheduling Office.

The West Campus classrooms will also be replacing five of the portables on East Campus, including the three rooms used by the temporary bookstore. Four more were already taken out of service earlier this semester because of mold.

The college also hopes to eventually convert the area near the portable classrooms into an open space, according to Communications Director Luz Reyes-Martin in a Noozhawk interview.