SBCC shut down, classes cancelled due to power outage 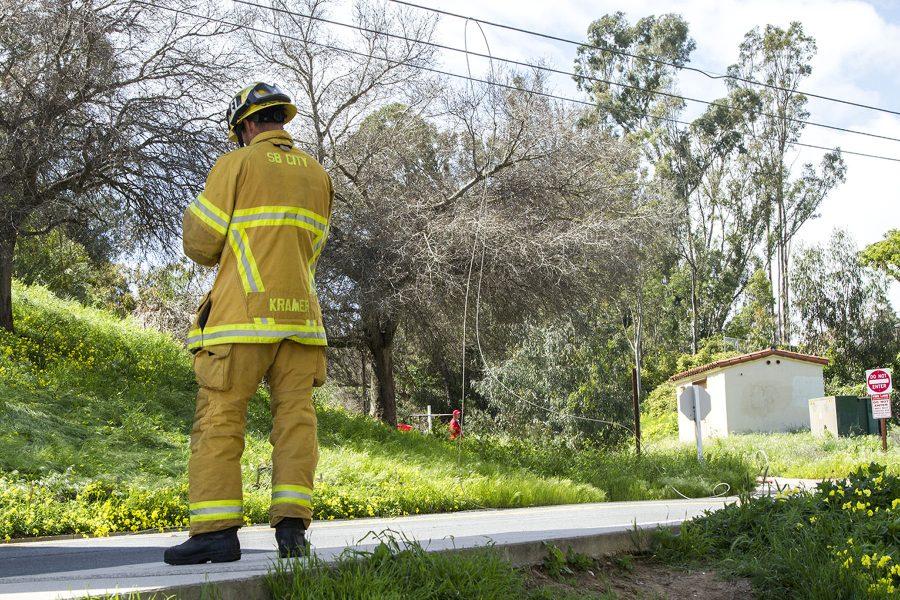 A Santa Barbara City Fireman on Loma Alta Drive after the power line snapped causing City College and neighboring areas to lose power Wednesday, March 22, at City College. The Bridge between East and West Campus was closed after a small fire from the downed power lines.

All classes and events for the day were canceled after City College lost power at approximately 1:30 p.m. Wednesday due to multiple power lines breaking near the campus.

A fallen palm branch may have broken the first power line leading to a power surge that caused the second power line break near the bridge between East and West Campus.

“We don’t know what caused it exactly. Potentially the palm frond and the power surge that shot up the hill,” said Capt. Joe Tieso of the Santa Barbara City Fire department.

Loma Alta Drive was closed from Shoreline to Cliff Drive and the bridge was blocked off to ensure the safety of students and passersby. The bridge remained closed at the time of publishing, but Loma Alta Drive is now open.

“I saw wires hanging on Loma Alta and arching off a street sign causing a small vegetation fire,” said Erik Fricke, director of the security office. “It went out as soon as it started because everything is green.”

Schott and Wake campuses still remain open and classes will proceed as normal, according to Director of Communications Luz Reyes-Martin.

This story has been updated.