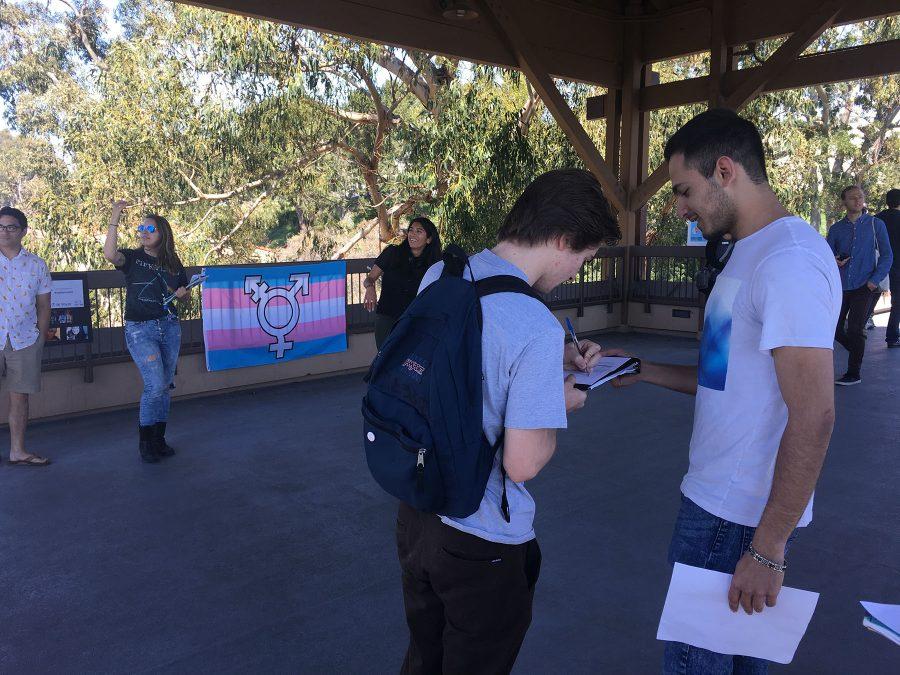 City College Student Thomas Crane signs a petition supporting gender neutral bathrooms on campus from David Panbehchi, commissioner of events for the Student Government, on Thursday, March, 16, on the bridge between East and West campus. The rally spread awareness and promoted gender inclusivity.

The City College bridge echoed with booming beats of trap music as students with all-gender symbols painted on their faces handed out fliers to passersby, while encouraging them to sign petitions to support the need for more gender neutral bathrooms on campus.

The rally was hosted by the LGBT+ Club and the Associated Student Government to raise awareness of the proposed gender neutral bathroom board policy set forth by Student Trustee Emily Gribble.

“A lot of the people closest in my life identify as transgender,” said sociology major Ainsley Meyer, president of the LGBT+ Club. “I see the toll it takes on people. It’s not fair some students have to walk across campus to use the bathroom.”

“I’m a trans student. That means I don’t identify as a man or a woman,” Pagano said in a speech. “The fact that there is not an adequate gender neutral bathroom at this school makes me feel unwelcome. It makes me feel like I don’t belong and that I don’t exist.

“This is not okay… and I am not the only trans student at this school.”

Director of Communications Luz Reyes-Martin, who was at the event, said in the past few months the college has been working with faculty, staff and transgender students to increase gender inclusivity.

“We want to work together with students,” Reyes-Martin said. “We know this is not just about bathrooms.”

Reyes-Martin the college’s efforts include inviting the Santa Barbara Transgender Advocacy Network to host workshops to train and inform staff on transgender issues, working with transgender students on documentation to indicate gender status change on paper and updating campus maps to indicate where gender neutral bathrooms are. She also said that when construction on the West Campus Classroom Building is complete, the building will include three single stall gender neutral bathrooms.

But according to David Panbehchi, commissioner of events for the student government, that is not enough.

While Gribble’s board policy proposes to have one gender neutral bathroom per building on each City College campus, including West Campus and the satellite Schott and Wake Campuses, Panbehchi said the LGBT+ Club is demanding two bathrooms per building on each campus. Although ideally, the club would like all bathrooms to be gender neutral, he added.

“I understand that can’t happen for sure [but] progress is good,” Panbehchi said. “Whatever gives us progress is fantastic.”

At the very least, Meyer said she believes there should be just as many gender neutral bathrooms as there are gendered ones.

The language on the board policy may still be subject to change, however.

Approximately 40 to 50 students from various organizations were in attendance at the event, including some student officers, Black Student Union and Feminist Club. Several administrators and faculty were also at the event, including Paul Jarrell, executive vice president of educational programs, Dr. Christopher Johnson, associate dean of educational programs, and Student Program Advisor Amy Collins.

Krystle Farmer, vice president for Black Student Union, said she believed the event was successful in raising awareness about this issue.

“I think people are just misinformed,” Farmer said. “Even I was.”

Flyers addressed to the Board of Trustees were passed out encouraging students to write why gender neutral bathrooms matter to them. Event organizers also asked passersby to sign petitions and handed out petition sheets for students to pass around in class to sign.

Previously, it had been planned to create an action item on the board’s agenda for Thursday, March 23 to discuss and vote on the policy. However, according to Panbehchi, it will only be agendized for discussion next week and will be set for a vote the following board meeting on April 13.

Members of the LGBT+ Club will be attending the March 23 meeting to voice their support to have more gender neutral bathrooms on campus.

“We hope to let them know what we don’t stand for inequality,” Panbehchi said.

-Brooke Snow contributed to this report.