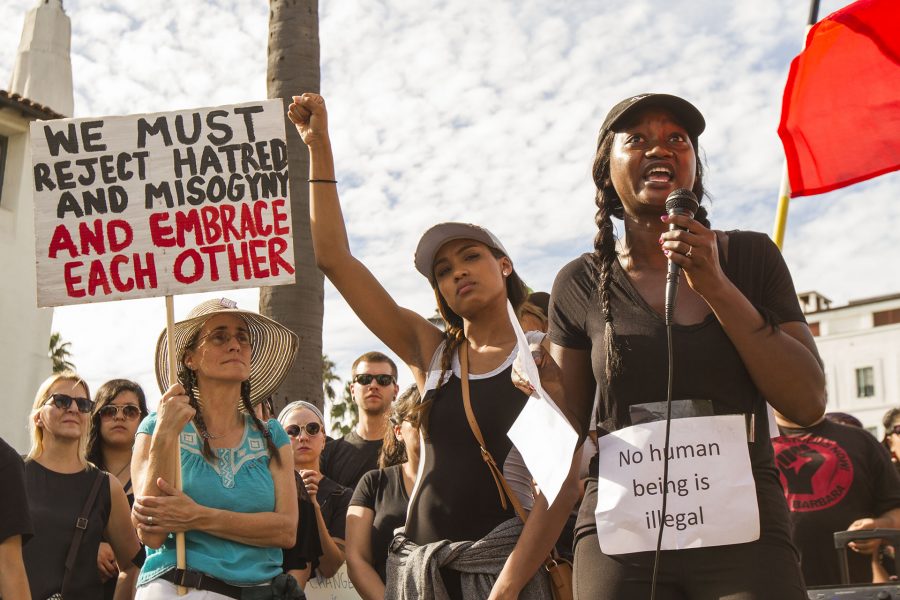 Akilah Simone Baker, a speaker from the Black Lives Matter movement, gives a speech during the united against hate march against Donald Trump, on Saturday, Nov. 12, at De La Guerra Plaza in Santa Barbara. The press release about the event said, 'Since Donald Trump began his campaign in 2015, the KKK and other violent white supremacist groups have had a resurgence.'

Signs for Black Lives Matter and LBGTQ groups flew high reading, “Love trumps hate,” as chants of, “Our people united will never be divided,” rattled the buildings of State Street.

On Nov. 12, People Organized for the Defense & Equal Rights of Santa Barbara Youth coordinated “United Against Hate,” a three-hour long protest against President-Elect Donald Trump. It was aimed at expressing solidarity while protesters express negativity toward his victory.

“It’s easy to feel like all hope is lost, but i’m also reminded because of my daily experience as a historian that our nation has managed to make progress towards equality,” said Danielle Swiontek, City College history professor and adviser to City College’s Feminist Club. “We have the capacity to change.”

The event intended to amplify love for one another in order to counteract hatred and violence and hopes to build a community that connects like minded residents with one another, according to its press release. Roughly 1,400 people pledged to attend through its Facebook page.

“We were out here today standing in solidarity with the victims of hate crimes, and to connect with one another to build a community that can support us for the road ahead with this person as the leader of the country,” said Candice Perez, a protest organizer.

The event started at De La Guerra Plaza where protesters met and made signs. Marcus Lopes Sr., member of the Barbareno Chumash Council, spoke first and set the tone for a fight for peace and tranquility.

“We know we’re against hate, prejudice, racism, sexism and inequality in the general sense.” said Lopes. “We have a lot of work to do—what’s new?”

Protesters then took to the streets, taking up two city blocks while marching to the beat of pounding drums.

“Love trumps hate,” was shouted by organizers with megaphones.

They marched and chanted down to the dolphin statue in front of the pier where more organizers spoke.

Marginalized groups, such as the LGBTQ community, women and feminists, and minorities united against the hate and violence Trump promoted throughout his candidacy.

“There are a couple newspapers across the country that have endorsed Trump,” said Eric Villalobos, UC Santa Barbara student and member of the Santa Barbara Student Activist Network.

The protest went unopposed for the most part, but there was one altercation where a man asked protesters whether they had actually voted and requested a group of minorities to show their green cards. Other protesters came to the rescue and stood between the man and the group, “creating a wall of love” to keep out the hate.

Police units followed the marchers, but made it clear to those protesting that they have no intentions of getting in their way.

“We’re just here to protect their rights to protest, not to contain them,” said Officer Michael Epstein.

Heavy presence of Mexican traditions were in the rally, which could be seen through the heavy use of Sahumador and Copal, which is the burning of incense in a perfumer. It’s a way to clear negative energy, said Chely Rodriguez, teacher at Adelante Charter School, an immersion Spanish-English elementary school.

The march continued to Pershing Park where guest speakers wrapped up the rally.

Zack King, member of the Bonfire Coffee and Books, brought a recent issue, which focuses on a local prison taking inmates’ rights to receiving mail. It showed what affects the Trump Administration will have on this social issue.

“We’ve seen over 200 hate crimes in the wake of his election,” King said. “I think we need to organize our communities to combat that and be safe when we can’t trust the state anymore.”

A traditional Mexican dance that featured a Chumash dancer closed the protest. The dance was performed by organizers of the protest and students from Ethnic Studies Now.

“We dance with our old Mexican tradition here in Santa Barbara,” Perez said. “With the blessing from the original people from Santa Barbara—the Chumash.”

This event is the first of many that the community is planning.