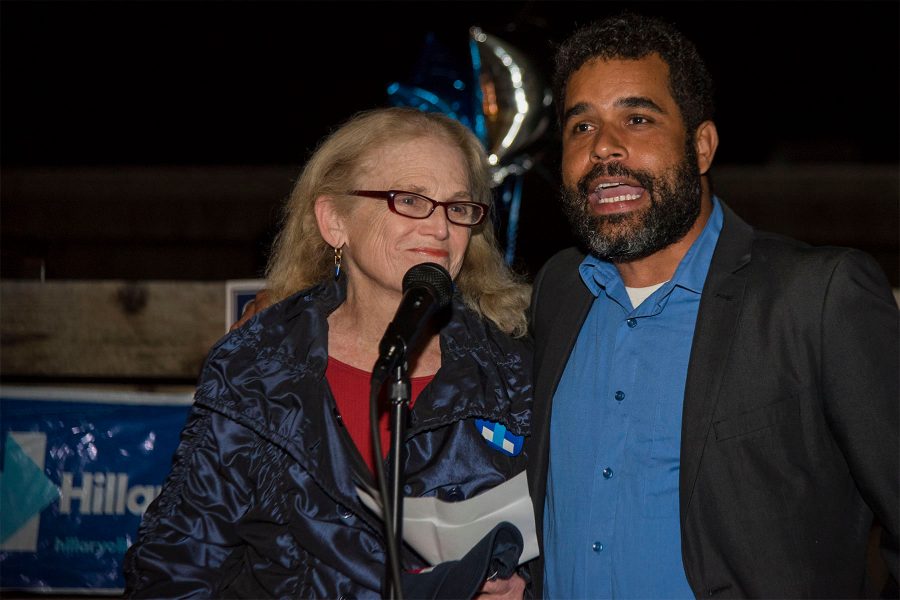 Susan Rose and Daraka Larimore-Hall talk about the future of the Democrat party in Santa Barbara after learning of Donald Trump winning the presidency on Tuesday, Nov. 8, at The Mill in Santa Barbara. Democrats won all the major local elections.

Chants of “Lock her up! Lock her up!” came from the Endless Summer bar-cafe patio on Tuesday night. Republicans bursted out in excitement as they watched the election televised on the big screen.

“The plastic bag ban is a common sense step,” said Daraka Larimore-Hall, chairman for the democratic party for Santa Barbara.

The proposition will enforce Assembly Bill Number 270, which will ban the use of plastic bags on a statewide level. Certain cities currently use local jurisdictions to enforce the bill at a county level.

The proposition ensures a ban on single use plastic bags from small grocery stores, convenience and liquor stores. However, there is some confusion in voters between Proposition 67 and Proposition 65.

For Proposition 65 stores would require a 10 cent charge for plastic bags, as opposed to banning them completely.

Proposition 67 has been something that the local groups, such as The Channels Keeper and City College’s Sustainability Club, have been working on getting passed for a long time.

“It’s a revenge ploy to punish the grocers,” said Scott Brittingham, who was wearing an Obama shirt reading “how do you like me now?” while attending a democratic party.

Local supporters passed out stickers reading “Say Yes to Prop. 67” and spread word about its differences.

Dave Heylen, spokesman for the Southern California Grocers Association, is in favor to change the shopping habits of consumers.

“Regardless of what happens, there will still be ordinances,” said Heylen in an interview with The Channels before election day.

He believes enforcing the ban statewide makes perfect sense due to its consistency. Over 150 ordinances have been made in California before Proposition 67.

Non-disintegrable bags blow out of landfills and are vastly building up in our oceans, causing pollution and killing wildlife. An estimated 1.5 million marine animals lose their life each year due to plastic.

“It’s a win for the environment,” said Adam Green, chair of the environmental studies department at City College, prior to election day. “It’s a useless thing created for convenience.”

-Tate Roman and Angela Rose Bickmann contributed to this report