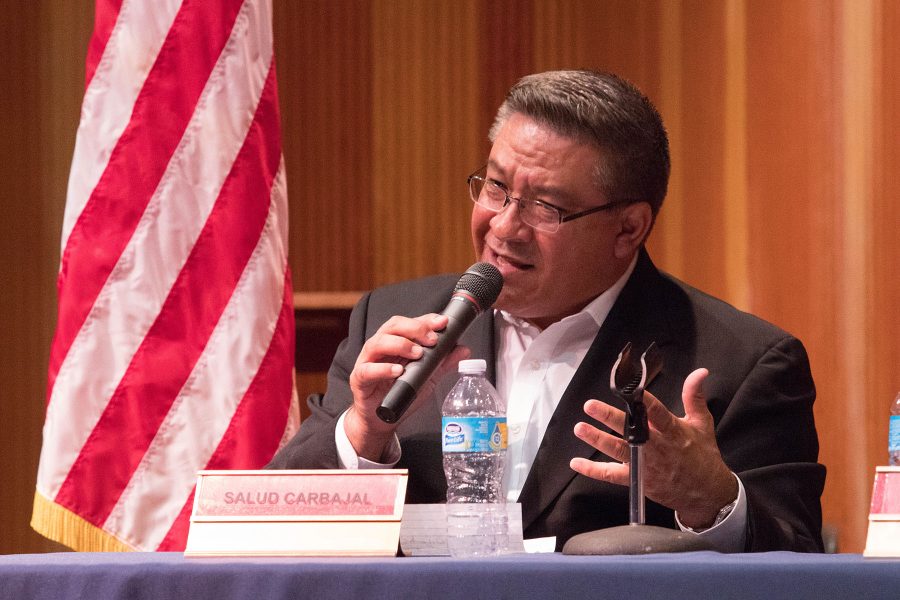 Democratic Supervisor Salud Carbajal shares what he plans to do if he is elected to Congress at the "Pondering Politics" Democratic forum at on Tuesday, Oct. 18, in the Fé Bland Forum City College. Phi Theta Kappa International Honors Society hosted the event.

City College’s honor society hosted a Democratic forum on Tuesday evening with a panel discussion between three California politicians and a professor in the Fé Bland Forum.

“If you’re not speaking out you’re being complicit,” Carbajal said.

State Representative Monique Limon is serving her second term as a Santa Barbara Unified School Board member and is a resident of the 37th Assembly District. She Currently serves as the Assistant Director of the McNair Scholars Program at UCSB.

Supervisor Salud Carbajal, once a farmworker in Oxnard, joined the Marine Corps Reserves and now represents the First District of Santa Barbara County and is running for U.S. Congress.

Carbajal spoke of having a federal movement partner with the state to make tuition be free.

He went on to explain the movement needs to expand on Federal Aid and Pell Grants, since they are the gateway to affordable higher education.

Carbajal then explained requiring billionaires and large corporations to pay their fair shares in taxes would help reach a more accessible higher education system, moreover, to rid of tax loopholes. He said corporations such as Offshore saving accounts like Oil Corporations could furthermore invest in education, and avoid rushing into the one in Iraq.

The state has to have a higher education fund source for marginalized groups since they are greatly effected through limited resources.

Proposition 55 on the November ballot calls for the continuation of taxing millionaires to prevent the $4 billion in cuts to schools. However it is only a temporary call for action, more permanent measures need to be proposed to ensure that everyone is paying their fair share.

“I think we have a lot to do assisting environmental communities,” Limón said.

The issue of inadequate police injustice striked fear in some students. A communication breaching needs to occur when providing effective training and resources to police personnel. The panelist discussed having police reflect the communities that they serve.

With an astounding participation from the audience the panelists received among many questions specific to policing, Proposition 64, and mental health issues.

Inadequate policing struck fear in some students. A communication breaching needs to occur when providing effective training and resources to police personnel said Carbajal while discussing police reflecting the communities that they serve.

“The most successful part of the night is when we got to ask questions. When I asked the question about what were folks biggest fears,” Limón said. “I thought one person or two people would raise their hands. But I was like oh my gosh people want to have a say to share with elected officials, and I think that was very powerful.”