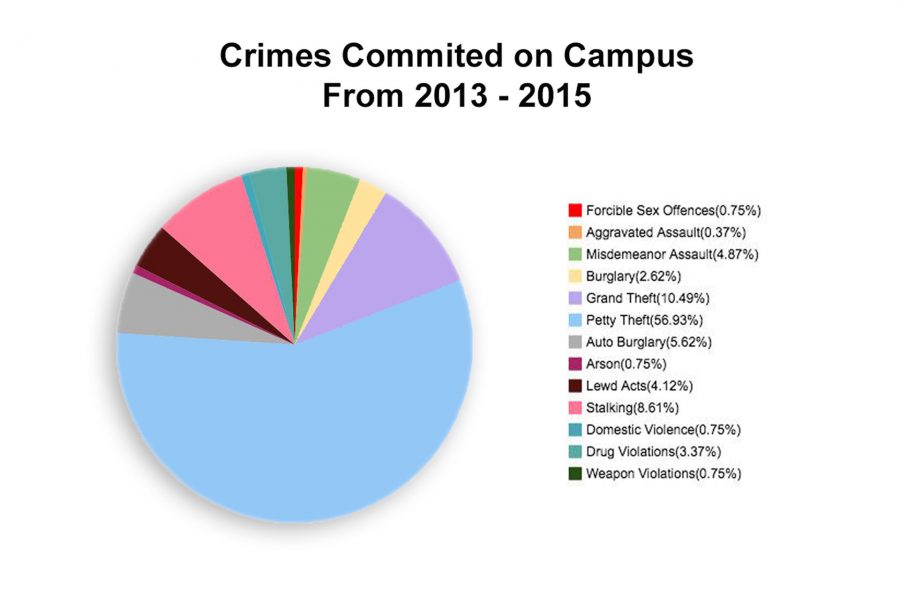 City College’s 2013-15 crime statistics were published this month, revealing the amount crime of the campus.

Despite some increases in crime throughout the three-year period, the statistics are low comparably.

“Our campus is very safe,” said Erik Fricke, director of campus security. “If you look at other colleges around the country, we have have very low crime here.”

The Clery Act is a federal law that requires all colleges receiving federal financial aid to publish all crimes associated with the college. The report shows crime from 2013 through 2015 has stayed relatively the same, Fricke said.

In 2013 one forcible sex offense happened on campus, three off-campus accounts in 2014, and one that occurred on-campus in 2015. The report made in 2015 was registered as “attempted” but  the college does not want to minimize the concern around the act, Fricke said.

Off campus crimes refers to the area surrounding the main campus, such as all the streets that are not divided by a main road. This includes Pershing Park and the Children’s Center on Loma Alta Drive.

There were no automotive thefts throughout the three years, but there were four automotive burglaries reported in 2013, and two in 2014.

Fricke said over two consecutive weekends there were nine reported automotive burglaries in 2015.

“It could be a local or out of town gang that just decided to hit a certain area,” he said. “They usually don’t hit a third time because at that point they are bound to get caught.”

There was an 80 percent increase of misdemeanor assault on campus from 2014 to 2015. There were seven cases reported in 2013. These assaults include physical violence that doesn’t require medical treatment.

“Petty theft is the biggest category of crime for Campus Security,” Fricke said. “Any items under $973, which are usually cell phones and bikes, are lumped into that category.”

In 2015 there were 58 accounts of on-campus petty theft, making it the most active year out of the three.

Fricke and a few other campus security faculty work with the Behavioral Intervention Team at City College. If students or faculty have a concern about a peer’s behavior they can then notify the team anonymously and the team will then reach out to the student if necessary.

“Santa Barbara is a safer city than most. We have very good law enforcement that responds quickly and patrols the area well,” Fricke added.

The collaboration with the team helps campus security prevent criminal activity inside classrooms.

“Team engagement with a person of concern can be critical to protecting the well being and safety of our campus community,” said Laura Fariss, director of student health and wellness and team member. “This most definitely contributes to a safe and healthy Santa Barbara City College community.”

The security office keeps a copy of the crime log available everyday from 9 a.m. to 4 p.m.