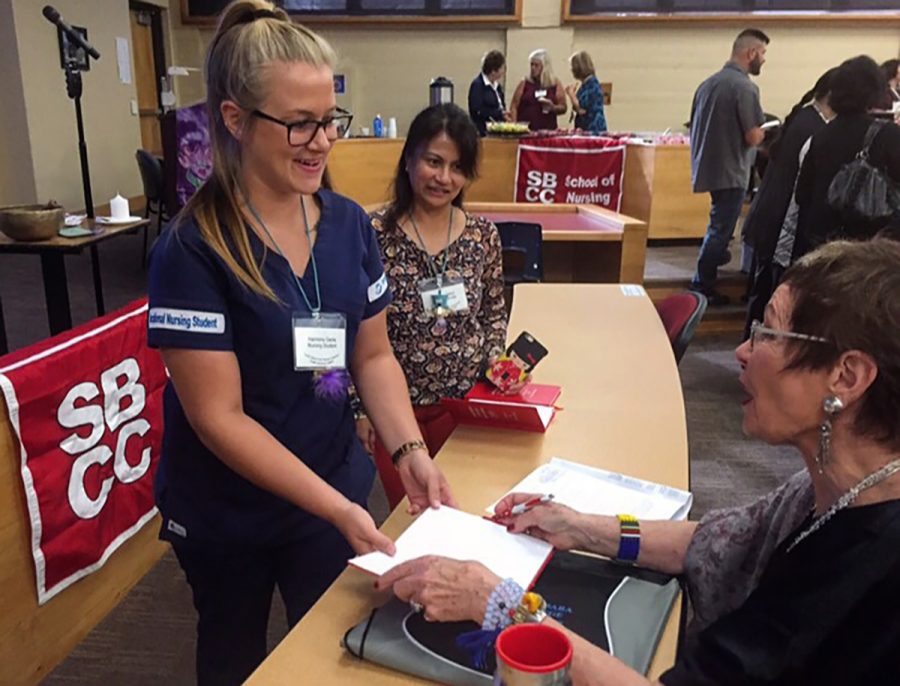 Nursing student Harmony Dante receives an autograph from Dr. Jean Watson before her introduction Friday, Sept. 16, in the City College Administration Building. Watson, who is a renowned educator in nursing, came to City College to talk to nursing students and staff about the importance of compassion in the profession.

Nursing “rock star,” Jean Watson, spoke with City College students and staff Friday morning about how they can make a positive difference in the nursing field.

As Watson made her way to center stage she choked up and paused for a bow. The jam-packed lecture hall filled with applause before she began her lecture about the importance of compassion in nursing.

She is an educator and the founder and director of her own nonprofit foundation, Watson Caring Science Institute. Watson also holds several other high-ranking titles, which include “Fellow” of the American Academy of Nursing and former president of the National League for Nursing.

Watson earned her undergraduate and graduate degrees in nursing and psychiatric-mental health nursing and holds a doctorate in educational psychology and counseling. She has traveled the world to educate thousands about the evolution of Western medicine in human consciousness, focusing on what compassion can do to help heal patients.

As an author she spreads her theory, “caring science,” to as many clinical nurses and academic programs possible.

Watson says nursing is not just the study of human health, but also the study of people. Through caring science nurses can study ethical ways of interacting with people, she said.

Ann Marie Kopeikin, vocational nursing director at City College, names Watson as the “nursing rock star” and firmly supports the American Academy of Nursing, quoting her as a “living legend.”

Nursing has lost its form of control and has become depersonalized, Watson said. Overtime, a number of nurses have started to look at their patients as another “task,” instead of human beings.

Kopeikin wants the City College nursing faculty to incorporate Watson’s teachings of compassion in their curriculum to broaden their approach to working with future patients.

During one of Watson’s visits to City College several years ago, Kopeikin realized students would flourish in nursing after being given the chance to listen to Watson.

Nursing Student Micha Wallen attended Watson’s workshop this year and plans to apply what she was taught to her future career.

“Her outlook on things is a totally different perspective,” said Wallen.

If the upcoming generation approaches nursing in a compassionate manner the field will have the potential to save more lives, Watson said.

The nursing profession is growing and students have to grow along with them in order to keep up with the changes people, similar to Watson, are working to promote.

“It is a matter of life and death if we don’t return to the source of compassion,” said Watson.

The event will continue at 8 a.m. Saturday, at City College’s Campus Center with speaker Simon Fox, executive director and co-founder of Adventures in Calling Foundation.