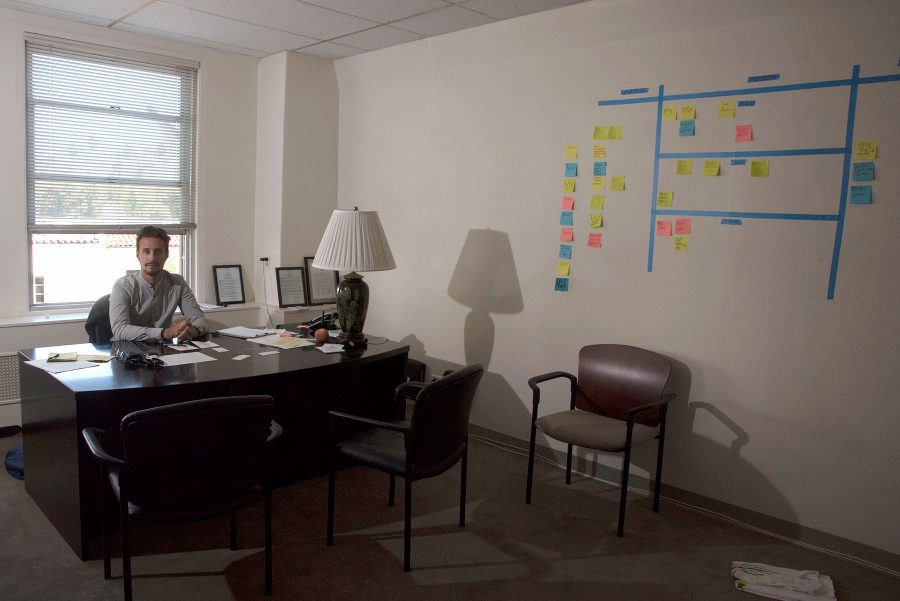 Lorenzo Marchetti, Italian ambassador for 2020 A Year Without War, sits at the desk in their newly acquired office on State Street on Friday, Sept. 9, in Santa Barbara. The group got the office to have more of a professional setting for their non-profit organization.

City College’s 2020 A Year Without War organization introduced its new global office this month, making a significant step in its mission toward a year of international ceasefire.

The international nongovernmental organization opened the office in the Balboa Building on State Street in Santa Barbara. This is the group’s first off-campus location since its formation about five years ago at City College. Numerous donations and fundraising events helped make the move possible.

President Lorenzo Marchetti says the group’s physical departure from campus does not mark its disassociation with the campus.

“SBCC is where the organization started,” he said. “It’s our home.”

Moving to the new off-campus office and introducing itself as an independent organization is essential for collaborating with the city and getting the community involved. Despite the new venue, City College remains a primary source of recruitment, as most volunteers are current or former students.

Right now 2020 A Year Without War is gaining global recognition. One of the most important goals for the campaign at this point is to build successful international relations in order to make the organization more prominent outside the United States.

The organization remains active on City College’s campus. Members meet weekly to organize at least one conference per semester, encouraging students from all departments involved.

Members will be flying to the District of Columbia to attend the United Nation’s International Day Of Peace Conference, which will take place on Sept. 21. Delegates plan to spend two days before the event meeting with foreign ambassadors who can potentially introduce the organization to United Nations, which is another major step towards the group’s goal.

The organization intends to keep building successful international relations, though what is equally important for the project right now is to keep improving their relationship with Santa Barbara community.

“I strongly believe that if people come together, people with different stories and backgrounds, they are capable of accomplishing something others thought was not possible,” said Yulia Abdulmanova, secretary to the organization.

“The 2020 A Year Without War team has a tremendous potential of making this difference.”