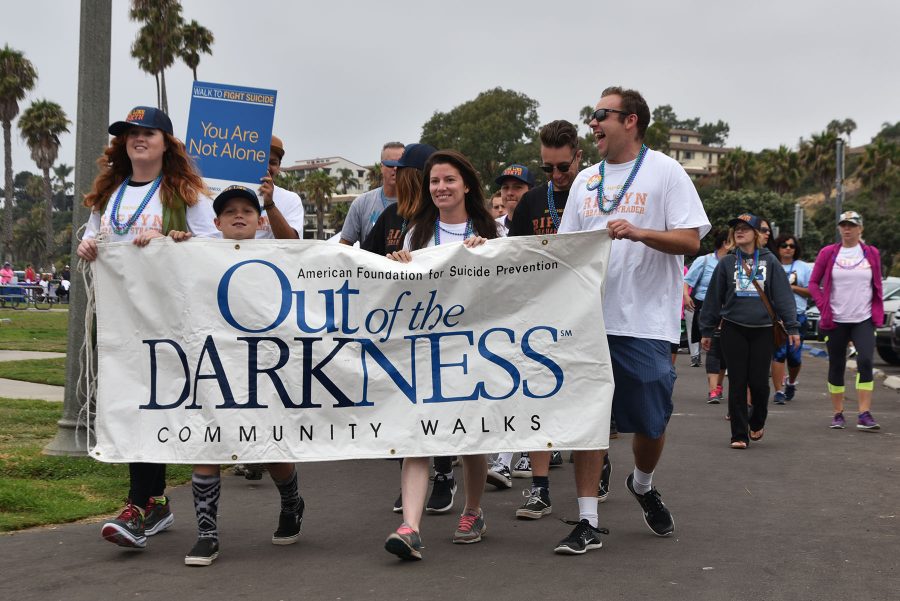 The suicide prevention banner is carried by (from left) Polly Davidson, Makai Callis, Brooke Cuevas and Orion Brutoco during the community walk on Sunday, Sept. 11, on Leadbetter Beach in Santa Barbara. The four were walking in remembrance of Ripkyn Strader, a previous City College student, who passed away on Aug. 16, 2016 from suicide.

Sadness turned into smiles Sunday morning as City College students were among the 200 participants in the walk to bring awareness to suicide prevention on Leadbetter Beach.

City College’s Wellness Connection Club, along with survivors of suicide, volunteers and loved ones joined the American Foundation for Suicide Prevention’s “Out of the Darkness.” The club raised about $2,300 at the event, and plans to distribute toward further action to preventing suicide.

Participants marched down toward State Street and back to Leadbetter, with signs, wearing at least one string of Mardi Gras beads, which were colored to represent personal connection to suicide.

Among the influx of participants was Santa Barbara Mayor Helene Schneider, who participates in the walk every year.

Schneider spoke at the event, in which she mentioned her step-brother who killed himself because of the trauma he experienced after witnessing the 9/11 attacks.

About half of the calls to the Santa Barbara City Fire Department are from suicide attempts, receiving at least one a day, according to officials.

“This is a major public health issue,” said Sen. Hannah-Beth Jackson. “We’ve lost more people from suicide than in Afghanistan and Iraq.”

Anthony Rodriguez, also known as the “big hugger,” volunteers for multiple organizations that dedicate their hearts to helping prevent suicide.

“Talk saves lives,” said Rodriguez. “The more we talk about it, the more we can make a difference.”

The American Foundation for Suicide Prevention assorted numerous resource tables to help inform and counsel those in need.

Roughly 1,100 American college students commit suicide each year, making it the second most common death of students, while even more have considered attempting suicide.

Julia Nelson, a City College student, didn’t realize how many people were affected by suicide until participating in the walk.

Rodriguez said the walk was “not about the distance,” rather about “bringing people and their families together.”

Rodriguez crosses his arms and observes the crowd.

“Something has to be done,” he said.

The Wellness Connection Club is on campus several times a week so the information it provides can be accessible to students.