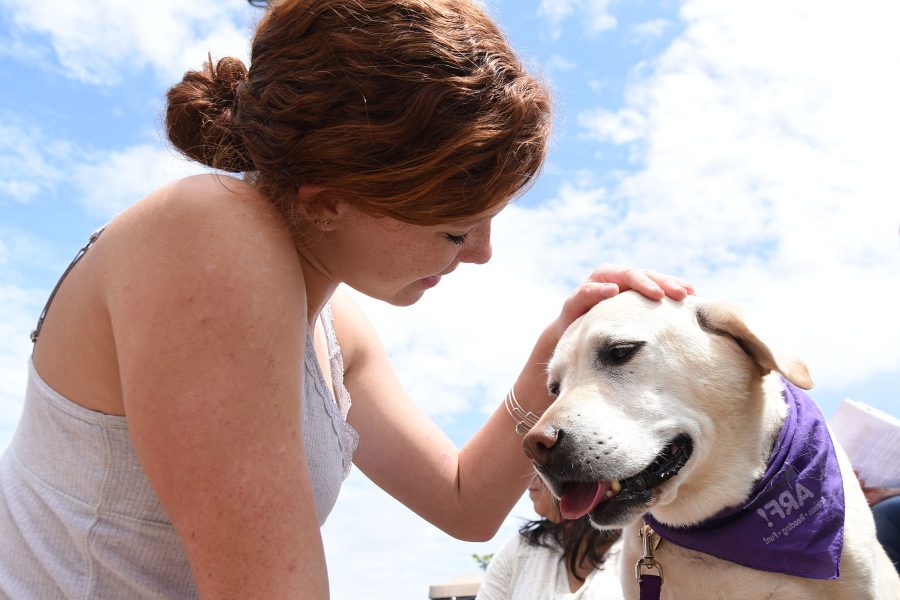 City College geology major Riley Rohrer, 19, sits and pets Ellie during the ‘Check out a Dog and Lower Your Stress’ event on Thursday afternoon, May 5, outside the Luria Library at Santa Barbara City College. The event was put on to help students relieve stress before finals week.

Hundreds of City College students were able to relax and play with a dozen therapy dogs provided by All for Animals and ARF Thursday afternoon in front of the Luria Library.

The dogs were brought to the campus by Elizabeth Bowman, director of the Luria Library. The goal was to help lower the stress of students during finals week.

Each dog wore a purple scarf and was the center of their own stage, bonding with students while staying close to their owners.

A white Jack Russell Terrier named Suzy, 4, developed the day’s first circle of students and gave everyone who knelt down to say hello a lick on the lips.

“She is such a sweet dog; better than any dog or husband I’ve ever had,” said Suzy’s owner Lisa Gordon, who rescued Suzy from the Ojai Shelter when Suzy was just 1-year old.

There were four labrador retrievers, one was named Ellie, 7, and a golden retriever named Lily Rose, 5. All the dogs quietly enjoyed the students’ company, only pausing briefly to take a drink of water.

“I came to just chill and pet some canines before I go take this gnarly final. Too bad there’s not any pit-bulls,” says City College student Angelo Munoz.

All dogs were on leashes and everything went smoothly during the two hour event. Not a single “woof,” just a dozen wagging tales and hundreds of grateful students.