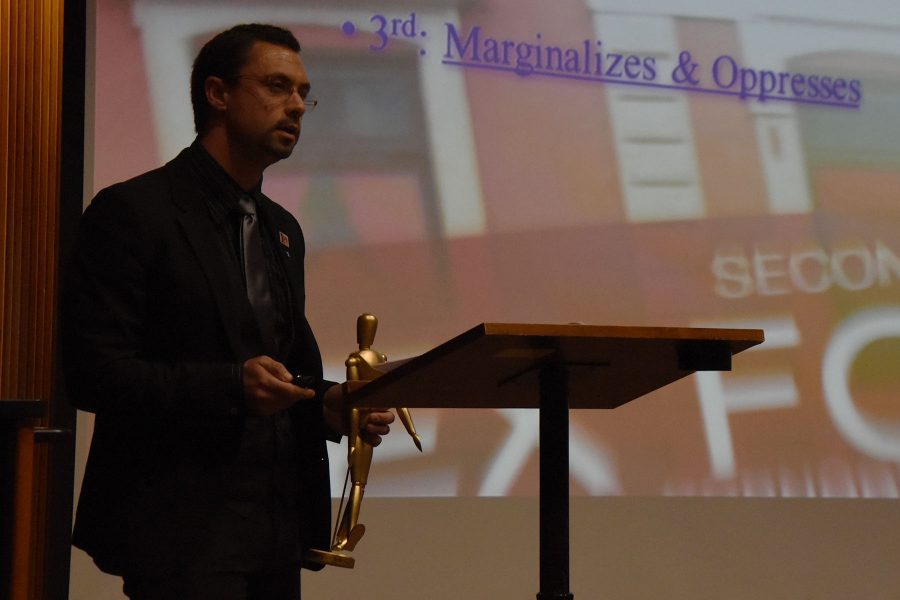 Honors student Matthew Poulin presents his first place winning paper titled “The Illegality of Prostitution is Unjust” to members of the honors program during the student conference on Friday, April 22, at the Business Communication Forum at Santa Barbara City College. The Honors program holds the student conference every spring and anyone is able to submit papers, art, music or movies about the chosen topic for prizes.

Over 20 students presented their interpretations of what “LIVES: Decent/Indecent, Indulged/Indigent” means to them at the 13th Annual Student Conference, hosted by City College’s Honors Program on Friday, April 22 in the Business-Communication Forum.

There were two sessions for the audience to attend in which they were broken up by themes of submissions: “With Liberty and Indulgence Today,” “Complicated Lessons from the Personal and National Past,” “Values We Live,” “Selective, Indecent Connections,” “Stripping Away Indecent Stigmas” and “Normalized Indecency.”

During an Academy Awards themed closing ceremony, the winner received a shiny gold artists doll called “The Alex” jokingly made to look like an Oscar. The $1,000 first prize was awarded to Matthew Poulin for his paper titled, “The Illegality of Prostitution is Unjust,” which discussed the indecent practices and laws associated with prostitution.

“I would like to thank my mom and dad,” Poulin said, as he laughed upon grabbing the “Alex.”

Honors Program Director Melanie Eckford-Prossor said Poulin’s piece was an “impeccably researched argument, devoid of emotion in something that is normally full of emotion.”

The $500 second place prize went to Molly Guillermo for her creative narrative which she left untitled. The judges had a hard time narrowing down third place, so they picked two. The winners were Jenna Dorn for her poem, “Blood-Stained Stripes,” written in reaction to the Newtown shootings, and Jordyn Reardon, who composed music coupled with an original poem titled, “Make Light, Not Fire.”

“I’ve never been able to finish a composition or a poem, and for this conference I was able to do both for the first time…and actually place,” said Reardon.

The conference started off with the three honors co-presidents introducing Jon Rick, a former City College honors student, to the stage. He offered insight into the possibilities after transfer, as he went on to graduate from UCLA and is now a medical student at UC San Francisco, researching HIV cells.

“It was so nice to have a foundation from City College where the teachers truly devote their full attention and time to you,” Rick said.

The conference granted creative liberty to students through a broad topic that allowed each participant to explore their own interpretation. Jackson Nazario presented a video about the indigent titled, “Surf Sesh with Joseph,” where he and a friend took a homeless man from State Street surfing for an afternoon. Student Linda Meyer read her paper, “Stripping Away Stigma: Female Sexuality,” which discussed the indecency of slut shaming.

There wasn’t a dry eye in the room after student Julia Nelson shared her personal story, “Decency as a Drug Addict,” and spoke about her drug-addicted past as a teenager and her sobriety journey.

Each session was followed by an open forum of questions and answers, allowing students to further explain their work.

Over 40 students submitted work this year and the honors program encouraged more people to join and partake in next year’s conference with the theme, “Change!”

The conference was graciously funded by Scott Pollard, the Winslow Trust and Trustee.

The Honors program’s website will also publish a magazine with all of the pieces from the conference, coming soon.