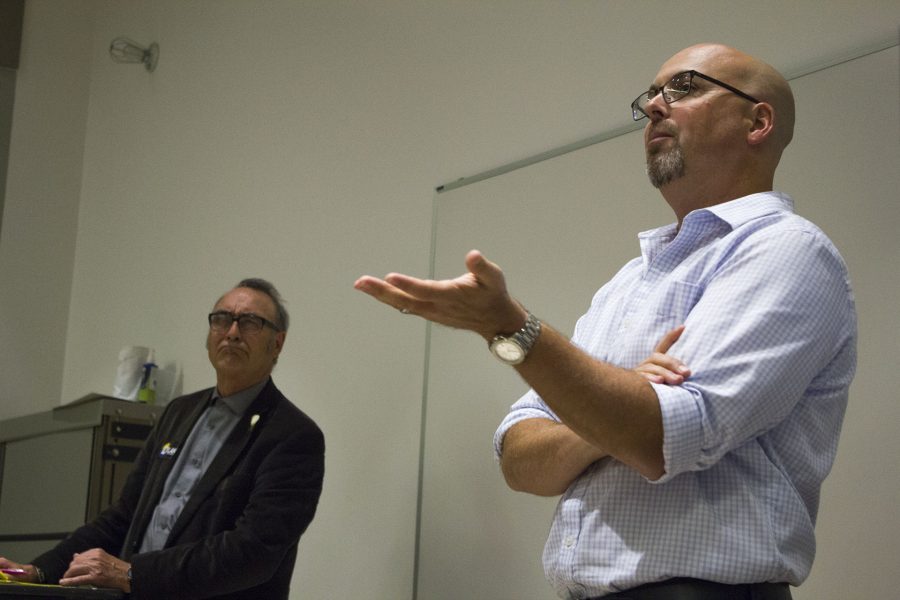 Philosophy Professor Joe White, left, and Environmental Science Professor Adam Green debated about morality followed by a question and answer period for the annual City College Prof-Off at 4 p.m. on April 14, in the Humanities Building Room 111 at Santa Barbara City College. The Honors Program puts on the annual debate between professors.

The two charismatic professors faced-off in the Humanities Building Room 111 in front of a packed auditorium.

After brief personal introductions from both sides, David Kim, member of the honors program and organizer of the event introduced the topic, “What makes a life decent and indecent? What does it mean to indulgent and indigent?”

The debate quickly gravitated toward the issue of global climate change. Neither side doubted its existence nor the role humans play in its creation. However, their thoughts differed on the ideology surrounding what moral responsibility humans have to the protect rest of Earth’s 8.7 billions species.

White, professor and chair of the philosophy department, opened his argument with a hypothetical situation similar to the movie “Wall-E.”

Imagine an earth degraded beyond the point of sustaining life and an entire human race aboard a spaceship in search of a new home. The ship finds a possible new home for humans, the only only problem is our arrival would wipe out all existing life.

White argued that if life on the planet were moral and self governing beings similar to humans, we would have a much harder time making that decision than we would if the inhabitants were uncivilized or animal.

Green, professor and director of the center for sustainability, was quick to respond claiming that humans continually treat each other as animals.

“I’m not sure humans are good at determining what moral beings are,” Green said. “They couldn’t even do it concerning their own species.”

Further expanding on his position, Green claimed “morality is a human invented idea. It’s conceided to let us define it and exclude all other species.”

The two professors quipped back and forth, each quickly rebutting a seemingly invulnerable claim from the other.

White’s platform focused heavily on philosophical ideas. He strung together thought provoking questions and hypothetical situations that forced the audience to reflect on their own beliefs.

Green, on the other hand, relied on evidence from the natural world to support his position. He brought up examples of animals behaving in ways strikingly similar to humans and past moral decisions that have come back to haunt us.

Before transitioning into the topic of indulgence vs. indigence, White left the audience with a profound final remark.

“Science is so powerful its lead us into our greatest age of ignorance. That’s also where we stand with morality,” he said. “People will disagree on moral decisions. That doesn’t mean morality is relative, that means it’s complicated.”

Professor Green opened the discussion on indulgence and indigence by setting a scene for the audience. Places like the Maldives or Solomon Islands that are slowly sinking below the water line as sea level rises due to global warming. Entire nations and their cultures displaced to new areas.

“Indulgence and Indigence depends on perspective,” Green said. “We rarely get to see what our impacts are on other cultures and other species.”

Green said we are not necessarily living indulgently by leading what we consider normal lives, but from the perspective of a person from another country, our lifestyle would be excessive and wasteful.

“Just by living in a house in Southern California you use 80 percent more resources than the rest of the world,” Green said. “To someone displaced from their home by sea level rise, our lives would seem very indulgent.”

White’s opinion on what makes a society indulgent or indigent was clear and simple.

“One of the measures is, ‘are you helping society make progress?’” he said.

Overall, both professors had similar views on both subjects, but their justification and reasoning were very different. White focused more on personal and humanitarian issues while Green emphasized the impact that human’s decisions have on the rest of the world.