Mother speaks at SBCC about forgiving her daughter’s killer 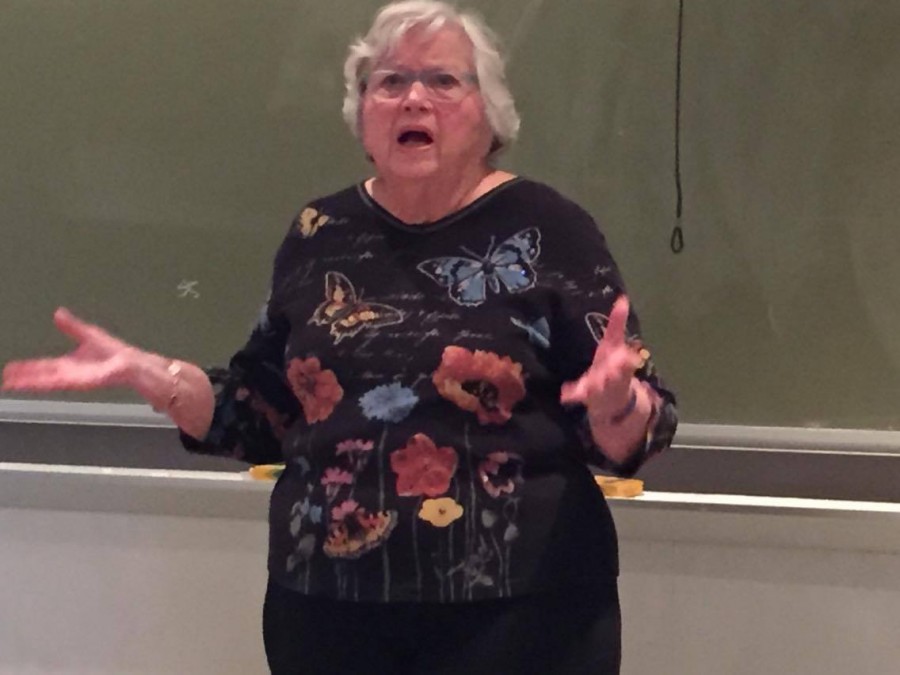 Aba Gayle, founder of the Catherine Blount Foundation, speaks Thursday, April 7 at City College about her life after her daughter was stabbed to death by Douglas Mickey. Gayle has forgiven Mickey and has since visited him on death row in San Quentin prison, in California.

The mother of a murder victim spoke Thursday at City College about the importance of forgiveness in the face of violence and the immorality of the death penalty .

The speech was hosted by the Luria Library and the Extended Opportunity Programs and Services as part of SBCC Reads 2016. Aba Gayle is the mother of Catherine Blount and founder of the Catherine Blount Foundation. Blount was stabbed to death in California by Douglas Mickey in 1980. Mickey was convicted and is currently on death row in San Quentin, California.

Some audience members themselves had lost family members to murder, and several people wept openly as Gayle spoke.

Gayle related that surrounded by people, with nobody to talk to, her anger and rage built a wall between her and the rest of the world. Finally, eight years after the murder, Gayle joined a little church in Auburn, Calif., where female minister Billy Blane and her husband led a “course of miracles” study group.

Gayle listened to tragic stories like her own, but the stories were slightly different. They ended with forgiveness from the victim’s families who had also lost a loved one.

“Wow! Maybe I can forgive the man who murdered Catherine?” Gayle said she remembered thinking.

That night Gayle woke at 4 a.m. and wrote a letter to the man who murdered her daughter. She respectfully began the letter by calling him, Mr. Mickey, and wrote she that she forgave him for what he has done.

“When I dropped that letter into the mailbox and heard the click, all the ugliness I carried for 12 long years was gone,” Gayle said. “I was suddenly filled with inner-peace, was truly in the state of grace. And simply for mailing a letter of forgiveness.”

Shortly after, she received a response from Mickey. He thanked her for the letter and told Gayle he now felt “relief and humble gratitude.” He also wrote that he “would love for her to visit,” Gayle said.

No longer wanting revenge for the “monster” who ended her daughter’s life, and despite her fears, set out for San Quentin to meet Mickey.

She waited three hours in a visiting room before Mickey was sitting next to Gayle, crying with her. She asked Mickey about his life before the murder.

Gayle recognized Mickey was dealing with the same exact pain Gayle had felt when he killed her daughter. Mickey’s mother and brother had recently committed suicide before he killed Blount.

“The day I visited my daughter’s murderer and looked around the visiting room at San Quentin’s death row, I didn’t see one single monster in that room,” Gayle said. “They were everyday normal human beings, just like in the room we are in now.”

Gayle’s hopes to help anyone suffering from a tragic death, but aimed her message mainly at the victims who cannot find it in their hearts to forgive.

“It was a heartfelt speech with a great message of forgiveness,” said Alberto Perez, an addictive disorders counseling major at City College. Two of his brothers were murdered a few years ago in Oxnard.

Gayle’s main objective with the foundation is to spread the message of forgiveness and to help abolish the death penalty to prevent what Gayle calls “more senseless killings.” She said she strongly believes her happiness is the direct result of her forgiving Douglas Mickey.