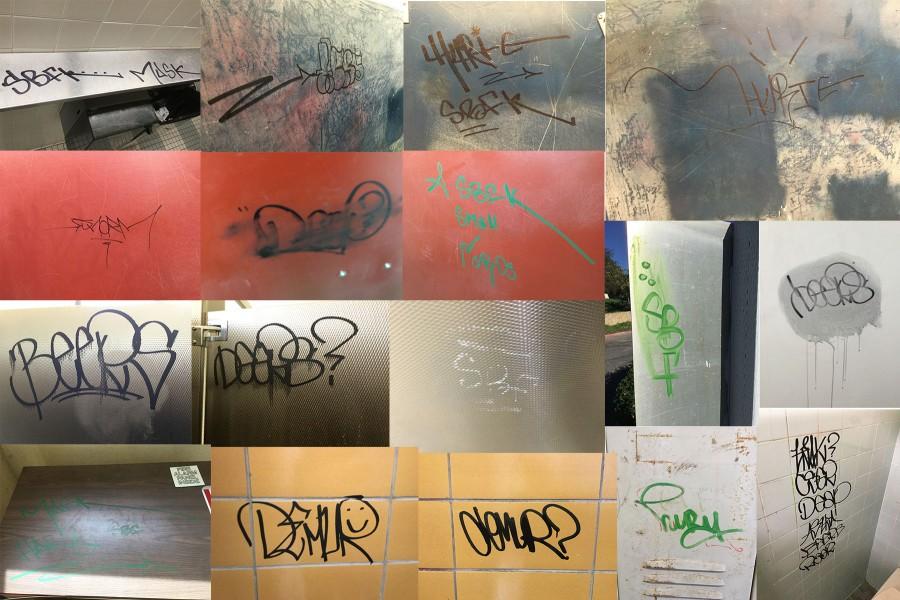 The City College janitorial staff is stepping up efforts to clear off an influx of graffiti throughout campus.

Graffiti is the most common form of vandalism found on campus and has been a continuous issue for years. However, the janitorial staff has discovered similarities between numerous pieces of graffiti, also referred to as tags, that have consistently resurfaced since the start of the semester. They and security officers suspect the tagging is coming from the same group of individuals.

The increased graffiti has amplified the amount time and resources the staff devotes to the issue.

“Everyday there’s two, three, four, five different tags that we get radioed to take care of and they usually want it cleared off fast so it doesn’t matter if we’re across campus,” said Lupe Huerta, a janitorial staff worker. “At minimum we dedicate five hours a week.”

The janitorial staff has been working together with the security staff to track down new graffiti as quick as they can.

“We’re doing multiple checks with the janitorial staff and trying to get it cleaned up as fast as possible,” said Eric Fricke, head of campus security.

The graffiti repeatedly appears in the restrooms in the Administration Building, Physical Science Building and the first floor of the Luria Library. Almost all the tagging appear in the restrooms and very few are actually found outside the buildings, Huerta said.

“We first open the bathrooms at six in the morning and continuously check them every few hours,” said Martin Sanchez, a janitorial staff worker. “And by 11 a.m. they are already marked up.”

The janitors are able to clear off graffiti from certain paint-free surfaces with a new product called Kimball Midwest graffiti-remover wipes.

But painted surfaces require a more tedious process. First janitors clear the surface as best they can before they apply a coat of primer. They then paint over the surface with spray paint that best matches the original color.

“We carry so many different colors of spray cans with us now because it has become part of the daily routine,” said Huerta. “But it’s still impossible to match the new paint with aged paint.”

The janitors have adopted a new approach to the issue in efforts to find the suspects and slow down the issue. Before, they would report to the vandalized areas and either clear off or cover up the graffiti and move on. Now, they take pictures before they proceed to clear off the taggings,  Sanchez said.

The photos are sent over to the Campus Security Office, where they have been stored for later investigation.

“We’ve been collecting the reports and pictures, and at some point, we may have to involve the police,” said Fricke. “But as of now they are not involved.”

The security staff and janitorial staff are approaching graffiti as an issue that needs to be taken care of, but some consider it a form of art.

“As long as it’s not really offensive or on an important building I think it’s kind of cool,” said City College student Kaitlyn Rogers. “But scribbles in bathrooms crosses the line over to vandalism.”

Some artists may consider graffiti a form of self-expression without considering the other side of it. The toll it takes on the janitorial staff, and the repercussions on cities and schools is often not taken into account.

“I understand that they say it is a way for them to express themselves, but their actions costs the school money, costs us time and no one really sees it because it’s in a bathroom,” said Huerta. “Then again, I don’t share the same mentality as they do.”