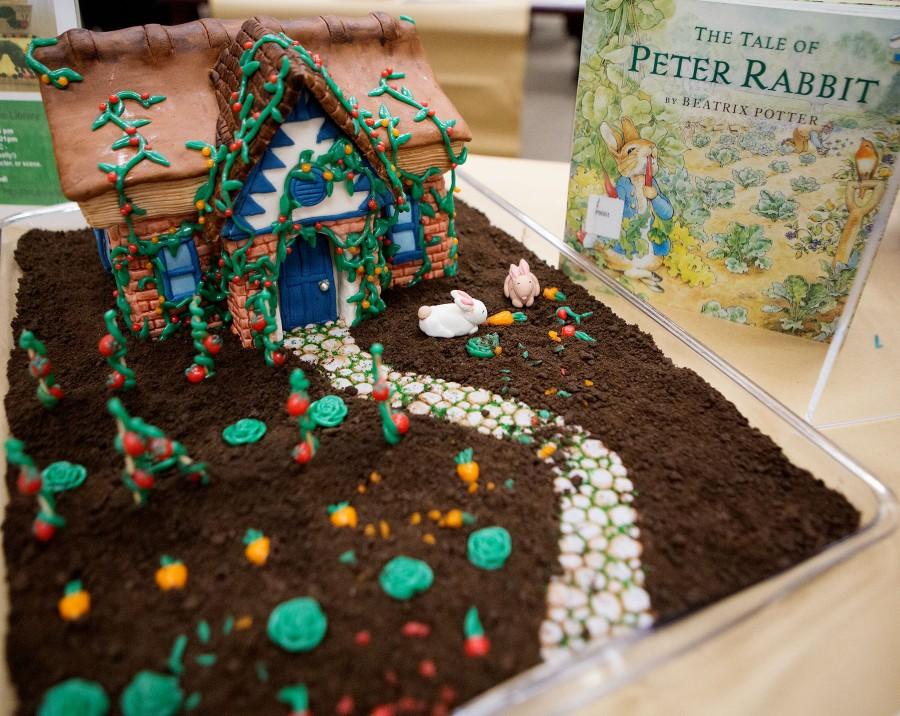 Lauren Peikert, 24, wins with her rendition of the “Tale of Peter Rabbit” at the 6th Edible Book Festival on Wednesday afternoon, March 23, in City College's Luria Library. Peikert’s cake won Best representation of scene, line, character, or theme of a book, as well as winging People’s Choice and took the cake for Best in Show.

“We were trying to channel Bukowski’s ugliness,” said Karl Bucar, an art major at City College.

Bucar was one of dozen City College students who baked a reference to their favorite book and smothered it with a slew of toppings for the Edible Book Festival  Wednesday, March 23, in the Luria Library.

This is the sixth time the contest has been held. Library Director Elizabeth Bowman and English Skills Director Margaret Prothero encouraged the contestants to bake a cake inspired by a famous line, a favorite story or character, a pun on a title or simply something edible in the shape of a book.

“We are hoping for a creative connection to books and ideas,” said Bowman.

Bucar, Gordy Roach and Ally Bortolazzo, who are all art majors, are in an artist’s clique they call “Sleek Reek.” The students collaborated on the piece.

They wanted to convey their adoration for Bukowski’s beauty and vulgarity by baking a cake that is “visually revolting, where flavor and image are heavily conflicted and enticing, the way his poems are, In other words, the truth,” said Bucar.

When the Sleek Reek’s “Dog from Hell” kept Bukowski’s tradition of not winning awards, the author’s famous and harsh personality was resurrected in Bucar.

“This place is full of a bunch of Coke drinking hippies,” said Bucar while stomping barefooted out the swinging glass door of the library, shouting through his brown tousled beard, “Santa Barbara sucks, don’t ever try!”

Lauren Peirkert, a former art major, made a cake in honor of Beatrix Potter’s poem, “The Tale of Peter Rabbit.” The cake received a different response from the judges and took home the most awards. Perikert’s cake won “most creative,” “people’s favorite,” and overall “best in show.”

“I wanted to make a house,” said Peirkert. “I thought this house would be a fun one to build, plus I loved the book as a child.”

The triple-award winning house had a roof made of chocolate that was supported by red candy bricks, green vines made of frosting and red and yellow balls of future tooth decay.

“It’s remarkable the effort that some people put into their creations,” Bowman said.

“This is such a great way to involve people in literature and culinary arts which are two completely different subjects,” said English Tutor Mary Johnson.

Johnson was one of many who stayed after the end of the event to get a taste of Beth Ruiz’s entry for “Seabiscuit,” a shark infested cake lathered with turquoise frosting and cylinder shaped, which won the award for the “most pun.”

Bowman is sure they will offer another Edible Book Festival in 2018, somewhere near April 1. “Although there were fewer entries this year, there was so much enthusiasm from the entrants and all the people who came to look, comment and eat the edible books.”