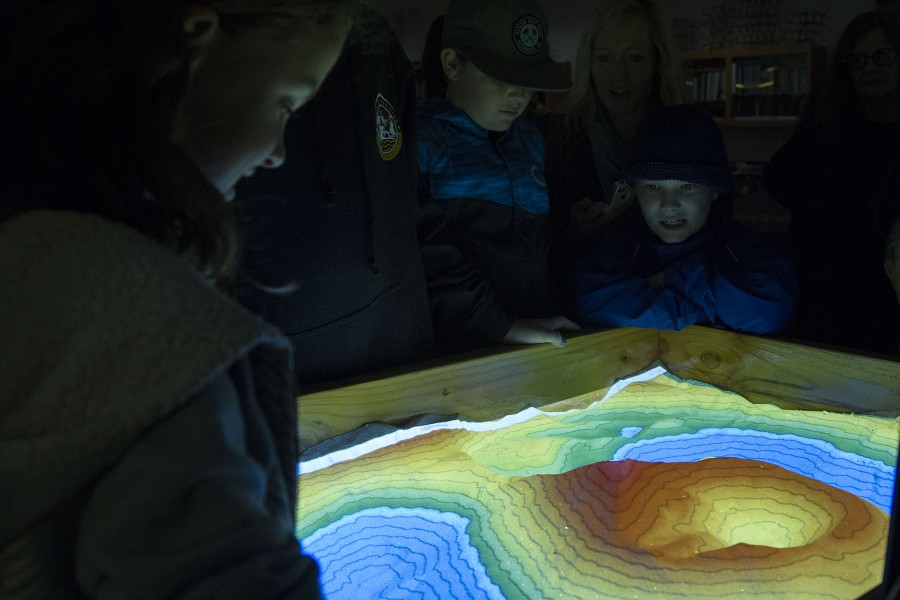 On a rainy Saturday, parents had flashbacks to science class while their children got a glimpse into their future as potential scientists at City College.

Classrooms all over East Campus were filled with science demonstrations and exhibits for the third annual Science Discovery Day, which is federally funded by the Title V grant. City College’s science, technology, engineering and mathematics departments, or STEM, organized the event, which ran from 1-5 p.m.

“I’m really proud of the science and math students here who are doing most of this stuff,” said Jan Schultz, director of the STEM transfer program. More than 100 volunteers from the college ran the event.

By 3 p.m. there were already more than 500 in attendance, most of whom were young wide-eyed children ready for hands-on experiments, and looking for science experiments to take home as souvenirs.

Schultz interacted with the children by showing them glowing mineral samples under a UV light.

“It’s a good community event designed for all ages,” said Schultz. “It shows people how fun science can be.”

One demo that got kids really excited was an interactive map projected on a sandbox. It used an Xbox Kinect camera to get a picture of the mounds in the sand and then projected a map onto the sand box that was topographically accurate. The map adjusted in real time to any changes made in the sand.

The software was invented at UC Davis and uploaded online for free to the public. City College’s Geology department recreated the demo. Currently, there are only three replications of this demo, the other at UCLA.

“This is the kind of thing that makes our school stand out,” said Alex Hall-Mounsey, vice-president of the Geology club.

In the physics department, children got to learn from passionate students like physics major Max Dornfest. Dornfest captured kids’ attention while he demonstrated Bernoulli’s principle with a shop vacuum. He also demonstrated static electricity and the way atoms form cymatic patterns due to sound and vibrations in the universe.

“We’re trying to show kids the forces they can’t normally see,” said Dornfest, over the shrieks of children discovering the power of centrifugal force by riding on a spinning chair.

In the Humanities building, children were introduced to computer programming. They got to see the possibilities available with only a small amount of programming knowledge, such as hooking up five bananas to your computer to make a piano keyboard, activated by your own electrical conductivity.

The Chemistry volunteers showed kids the colorful and sometimes explosive reactions that result from mixing ingredients that are otherwise neutral. The kids who had visited that booth were easily distinguished by the cup of brightly-colored expanding foam they carried with them.

In the biology rooms, kids got up close and personal with creatures like tarantulas and snakes, and even human organs, like brains and lungs.

Despite two years in a row of rain on the day of the event, attendance is on the rise and discovery day is planned to continue in the future.