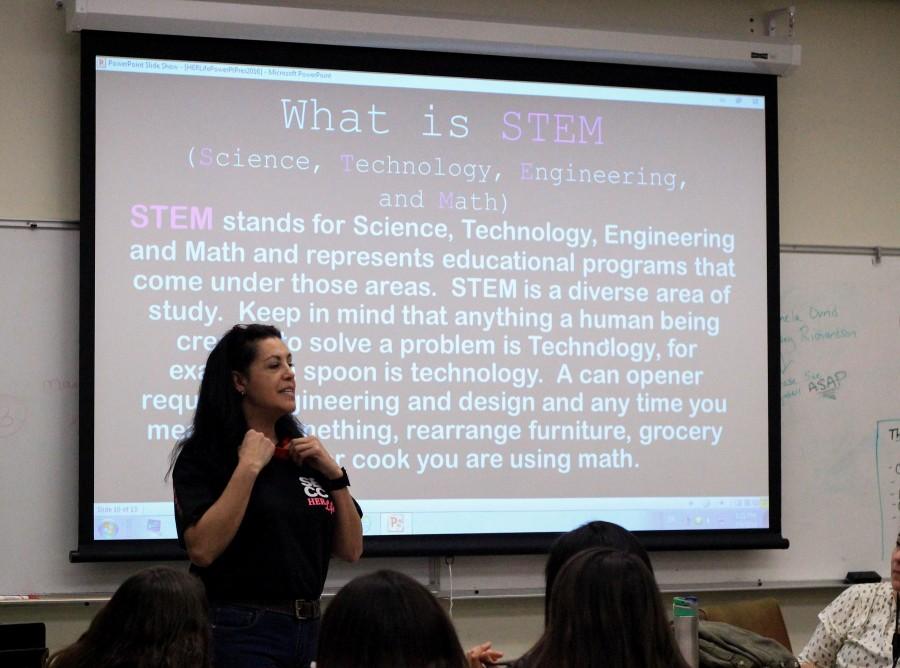 Michelle Gottwald, instructor at the School of Nursing at Santa Barbara City College, leads a game of bingo about the many career fields in Health and Human Services on Friday, Feb. 5, at the Garvin Theatre. The game was part of one of the workshops encourage young women to pursue an education and career in Science, Technology, Engineering, and Math.

With a program designed to advocate for more women in a typically male-dominated fields, over 300 young women from various local high schools visited City College to experience the “Her Life” event on Friday, Feb. 5.

The event took place on east campus and local young women were invited to experience workshops that had the purpose to inspire female students to consider pursuing careers in Science, Technology, Engineering and Mathematics (STEM).

Starting off the event was keynote speaker Sylvia Acevedo, award winning chief executive officer. President Obama appointed Acevedo as a member of the White House Commission for Educational Excellence for Hispanics in 2010.

“I was told by my college counselor, ‘Girls like you don’t go to college and they definitely don’t study engineering,’” said Acevedo, as she addressed the crowd of young women in the Garvin Theatre. “And I decided I’m going to go to college. I said ‘If I can cook, then I can be an engineer.”

Acevedo began as a young girl fascinated by the stories of groundbreaking women such as Clara Barton and Florence Nightingale, to working as a rocket scientist at Jet Propulsion Labs.

She noted that upon starting in a male-dominated field, there was a serious lack of accommodation to women. Like no women’s restrooms in the workplace and only male-sized gloves were available.

“I didn’t let that stop me, because I was doing what I wanted to do,” said Acevedo. “Don’t ever give up, even when there’s obstacles. Keep your focus on your dreams and don’t be afraid to ask for help.”

The presentation also addressed the City College Promise, which will allow students from local high schools to receive two years of classes and textbooks for free.

The speech went over testimonies from three City College students; Melissa Nunez, Maribel Anguiano, and Brooklyn Harmon. The students were set as examples to high school students, highlighting the importance of choosing a college suitable to their majors.

“It was especially inspiring to be able to look up to a woman that looks like me,” Anguiano said.  “It’s a conversation that you don’t really hear a lot.”

Anguiano was the first in her family to attend college, and encourages young women to not be afraid to succeed, and to see other women succeeding.

Following the speakers, the women were invited to the Student Services Plaza where workshops and booths were set up to help guide the students in areas such as transferring, counseling, student life and other City College resources.

“As a Mexican it can seem hard to do it all yourself because you don’t have many examples,” said Ramirez. “I like how Sylvia showed how things like that don’t have to matter.”