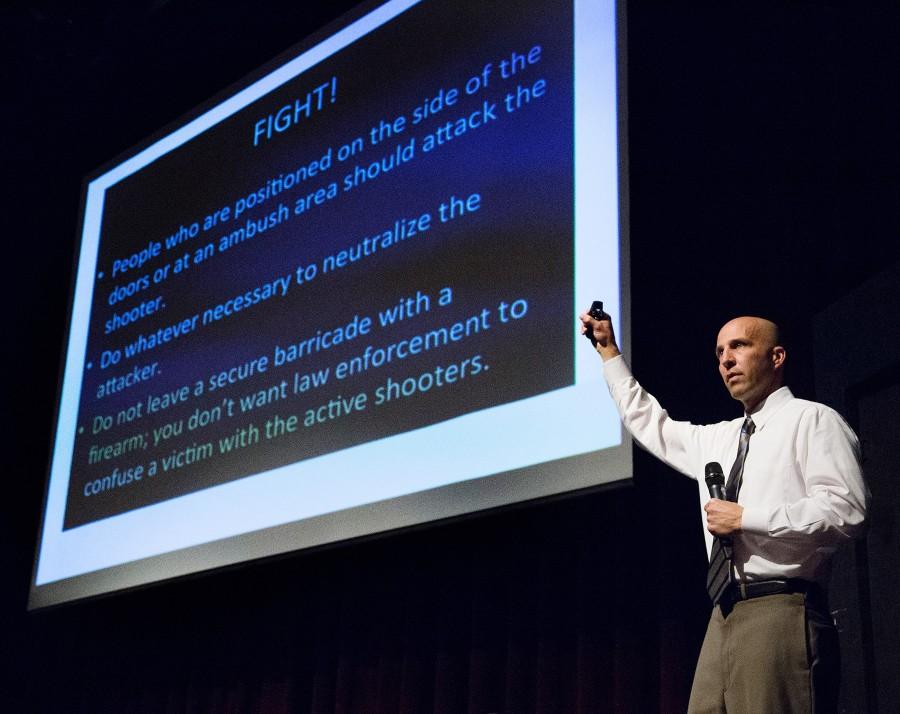 Sergeant Shawn Hill from the Santa Barbara Police Department educates students and faculty about active shooter trends and how to defend yourself at the Active Shooter presentation in the Garvin Theater on Tuesday, Feb. 2. Hill works as an Adjunct Faculty member in the Justice Studies program at City College and has been with law enforcement for 15 years, working eight years as a SWAT officer.

An Active Shooter presentation was held by a Santa Barbara police officer at the Garvin Theater today in an effort to prepare the community in the event of a dangerous situation on campus.

Police Sgt. Shawn Hill, an adjunct instructor with the City College school of justice, held the same presentation for the first time last semester. The goal of the lecture was to inform students and faculty members how to protect themselves if an active shooter threatened the college, Hill said.

“We are in survival mode,” said Hill. “And the only person that is going to be able to make the right decision at that moment is you.”

An active shooter is defined as an individual actively engaged in killing or attempting to kill people in a populated area, Hill said.

He shared data from an FBI study from 2000 to 2013 that examined 160 incidents and revealed an overall increase of situations of this kind.

The sergeant gave tips on how to react in a dangerous circumstances, and encouraged audience members to “run, hide or fight.” He compared his tips to a “tool-box,” and explained that an individual should evaluate the situation before deciding the smartest way to act.

“I felt like it was very helpful to hear about how to handle such an intense situation,” said Cedric Holz, a computer science major. “It happens, and it’s continuing to happen. No one really feels safe, so it’s important to know what you should do.”

Hill has worked with the Santa Barbara Police Department since 2001 and spent eight years working on the Special Weapons and Tactics team. He applied his experience and training to the presentation, making it more interactive by encouraging questions, and asking for volunteers to aid him on stage in informative skits.

Not all students and staff members that went to the past two presentations left feeling enlightened. Chemistry instructor Raeanne Napoleon attended the first lecture that Hill presented last fall semester and found herself overwhelmed by the experience.

“I wanted to see what they had to offer,” Napoleon said. “And I was going there with an open mind to learn what I could do if we ever had that type of situation on campus.”

Napoleon was employed at City College during the time of the Isla Vista shooting in 2014, and stated that the fear and grief that followed continues to haunt her.

A partial recording of the dispatchers call from the Aurora shootings in Colorado was shared at the beginning of both presentations. Napoleon explained that she had trouble sitting through the clip because it brought her back to the night of the shooting.

Hill gave a disclosure before presenting the clip at today’s lecture that the nature of the video would be difficult for some to listen to.

Napoleon expressed that she was unsure whether or not he explained the sensitive nature of the audio recording before playing it last semester.

“Even if he did, I don’t think I would have realized that it was going to bother me,” Napoleon said. “He started playing it, and I started listening to it and essentially had a panic attack.”

Throughout the rest of the presentation, Hill stressed the importance behind informing the public of how to handle a threat on-campus. He expressed that he will continue to present the lecture during upcoming semesters, as it continues to be a national issue.

“The most important thing to me is for people to think about it all ahead of time,” said Hill.