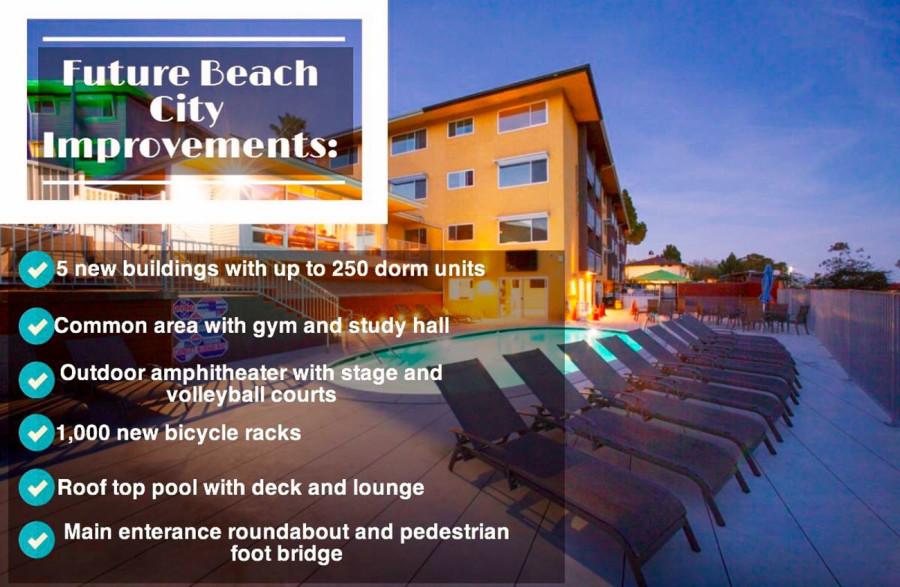 After years of struggling to find an answer to the housing issues plaguing Santa Barbara, Beach City apartments will attempt to create student dorms as an alternative for City College students.

Beach City is currently exploring plans to expand the complex by 1,000 beds, offered exclusively to City College students. The seven current buildings hold about 490 beds in 97 units, but they hope to eventually house 1,200-1,500 beds.

“The concept makes sense, it’s a question of how it’s actually going to work,” said Daniel Gullett, associate planner for the city of Santa Barbara. He went on to say the city planning division supports “development of student housing.”

Community members living on the Mesa have often voiced their displeasure towards their City College neighbors. At a joint City Council and Board of Trustees meeting, many complained that nearby students were turning the area into another Isla Vista.

“The big piece of this is supervision, they can’t put 1,200 students on a property and expect that one or two security people will be able to maintain it,” said Ben Partee, dean of student development. “If their intent is to add more beds to their facility, then they’re going to have to increase their current level of supervision and develop standards that will provide students with the ability to do what they came here to do.”

A project of this size could take years to complete. Developers must go through a planning process to obtain permits before they can even begin construction.

After providing a pre-application and receiving feedback from the division’s staff, the planning company will have to submit a completed application and pay all associated fees. Then the plan’s design and environmental impacts will be reviewed for the city to finally either approve or disapprove the requests for permits.

The complex is working with consulting company Suzanne Elledge Planning & Permitting Services Inc. on the project. They submitted a pre-application to the planning division in June 2015.

“Everyone is looking at it, at the big issues and what needs to be considered as the project moves forward,” Gullett said. “I understand that they’re addressing comments in here and would be submitting another in January.”

Currently, there is no plan for how the proposed dorm will affect parking and traffic near City College. Gullet explained that with more students living in such close proximity to campus, it is expected that traffic and the parking crisis will be less of a problem.

The pre-application and city review can be requested for viewing at the planning division in the Community Development Department, at 630 Garden Street.

[editor’s note: a previous version incorrectly stated City College was working with Beach City in association to create the new complex. It is a private endeavor by Beach City alone.]