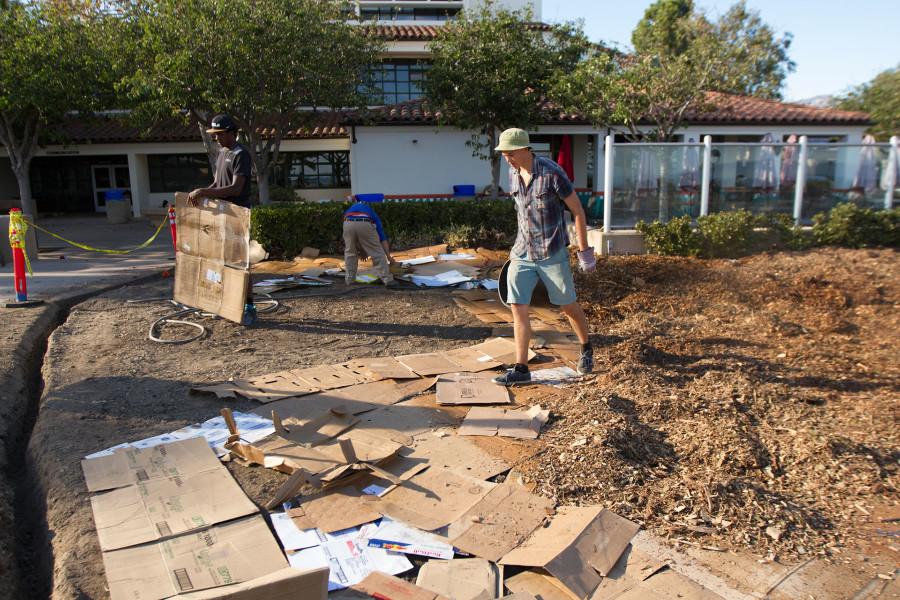 City College’s Center for Sustainability has begun its project of replacing the dead grass by the West campus snack shack with a permaculture garden.

Students from the projects and sustainability class along with the permaculture design class and other student volunteers met on Sunday, Nov. 8 to work on the first steps of building the garden. The plan is to create a garden that will be able to self-sustain year-round, and potentially produce food for the college as well.

“The main reason we wanted to do a permaculture garden is because of the drought,” said Kendall Craig, the center’s project manager. “We want it to be completely sustainable, more so than just sustainable for the future, but we want to make it better for future generations, to make the campus more aesthetically pleasing while bringing in biodiversity.”

With one plot ready for planting from last semester, the students worked to get the plot next to it ready to plant as well. Right now there are only two plots being worked on, but they intend to someday transform all of the grass plots surrounding the Interdisciplinary Center and Business Communications Building into gardens.

The Center for Sustainability directed by City College’s Adam Green consists of students and faculty members who strive to inform more people on campus and the surrounding community about sustainability and maintaining the health of the environment.

Each semester, students taking the permaculture design class, currently taught by Daniel Parra Hensel, form groups and are asked to design something that is sustainable and also gives more output than input required.

This semester’s group that chose to do the garden is Jackson Hayes, Quintin Highsmith and Maddison Nicholas. They said the biggest challenge they’ve faced has been getting volunteers to come out and work. The first workday they barely had anyone come out and volunteer. But by using Facebook, tabling, putting up flyers and word of mouth, the group was able to get some more hands to help on Sunday.

“I’m really surprised at the amount of people that showed up willing to work in the hot sun,” Hayes said. “Everyone’s willing to do back breaking work too, using pick axes to break up the soil is tough, especially with the hard clay.”

Volunteers who showed up to work were provided with refreshments and snacks including water, juice, fruits, nutritious bars and baked goods.

The goal for Sunday was to dig a perimeter trench to separate where the soil meets the concrete, level the area and then lay cardboard donated from the campus bookstore down and mulch on top, a process called sheet mulching.

Volunteer Manny Mora, who is currently taking the projects and sustainability class, is excited for the garden and the novelty of it.

“I think the garden is going to look great,” Mora said. “ A lot better than dead grass and a lot of campuses don’t really have that, a garden instead of grass. It’s pretty unique.”

According to Craig, exactly what they are going to plant is still being decided, but the intention is to have different levels of plants that benefit each other and provide each other with different nutrients for survival. Craig called it, “A permaculture food forest.”

There is no set date for the next workday, but Craig said they plan on meeting again in a couple weeks and also want to try and have one on a weekday for those who work on the weekend.

“I am really impressed at the turnout today,” said Grounds Supervisor Mark Broomfield who was on site helping on Sunday. “Last time they had about two people. But the students got the names and got them here. When it comes to volunteering, it’s easy to get the names, it’s hard to get people here.”