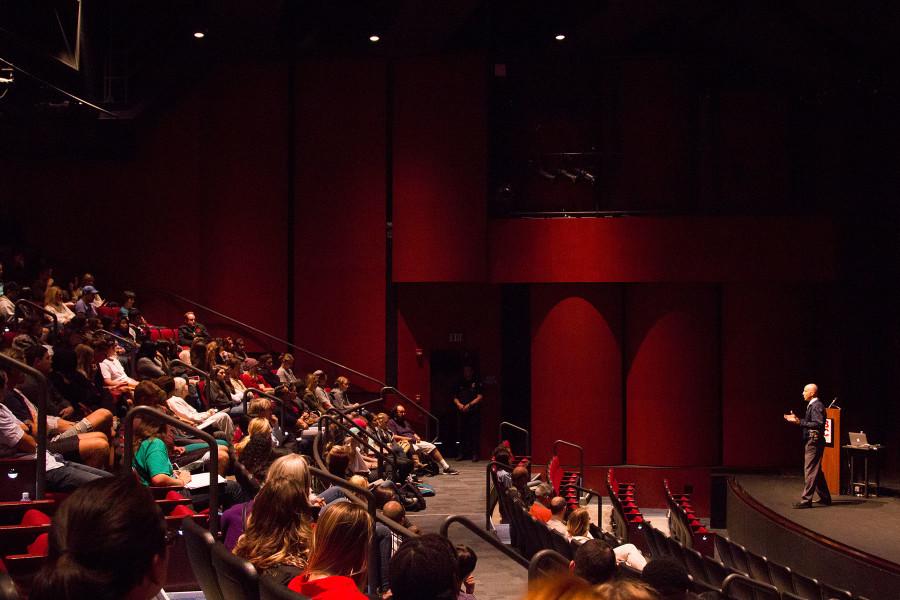 Sergeant Shawn Hill answers students questions at the ‘Active Shooter’ presentation, helping prepare them in case of an emergency situation with an on-campus shooter or assailant, Wednesday, Nov. 4, in the Garvin Theatre on West Campus. Sergeant Hill is adjunct faculty at City College, and has 15 years of experience in law enforcement and eight years of training with SWAT.

A police officer held a presentation on what to do if there is a threat to student safety at City College, as a response to the trend of violence in schools.

Officer Shawn Hill informed roughly 200 students and faculty members about how to protect themselves if a shooter is on campus. The presentation took place at 2:30 p.m. Wednesday, in the Garvin Theater.

The officer is an adjunct instructor in the school of justice at City College and has been an active law enforcer for 15 years as a Field Training Officer, Restorative Policing Officer, and as a Special Investigations Detective for narcotics. He also spent eight years on the Special Weapons and Tactics team.

“This is a widespread societal problem,” Hill said. “This isn’t occurring in only one part of the United States, it’s occurring all over the country and it’s important that we recognize that.”

He began his presentation by highlighting statistics, which revealed that about one fourth of the 160 mass shooting incidents that took place between the years 2000 and 2013 occurred on school campuses.

“I’ve obviously known about these situations, but never really knew what to do if a shooter was on campus,” said Phoebe Roberts, a psychology major. “It really made me realize that these shootings can happen anywhere.”

Hill’s goal was to encourage the audience to create a plan of how to react to an active shooter, which should ideally be as simple as possible to visualize so that they can practice it.

“Those who find the opportunity to run should run strategically,” Hill said. “People who run from the shooter should make small sprints to places where they can hide, and if possible gather other people along the way to find a safe location.”

When possible, students should call 911 and describe the situation to dispatch in detail so that the officers can locate the shooter faster.

“Although escaping the situation is preferred, many people don’t get this option,” Hill said.

He encouraged those who cannot run away from the active shooter to lock the door and find an alternate route to escape. If that is not possible, students should strategically conceal themselves as much as possible.

If victim’s bodies are in the room, “playing dead” is an effective way to hide from an active shooter, Hill said.

“You want to buy time in these instances while authorities are on the way,” he added.

Hill used five volunteers from the audience to help him demonstrate how to barricade a doorway using chairs and tables on the stage.

If fighting is the only option, Hill explained that students should improvise weapons by using resources in their classrooms to fight the armed person. Chairs, fire extinguishers, books or backpacks can all be used as weapons against the shooter. Pens and keys can be used to stab the shooter.

“Play the ‘what if game,’” he said. “Consider alternate escape routes in the room and know your surroundings so you create a plan.”

Students in the audience said they found Hill’s advice to be helpful for these situations that are becoming more common every year.

“The presentation really taught me a lot about what to do in one of these situations,” said Cynthia Fernandez, a biology major. “I really appreciate that the officer did this for City College.”