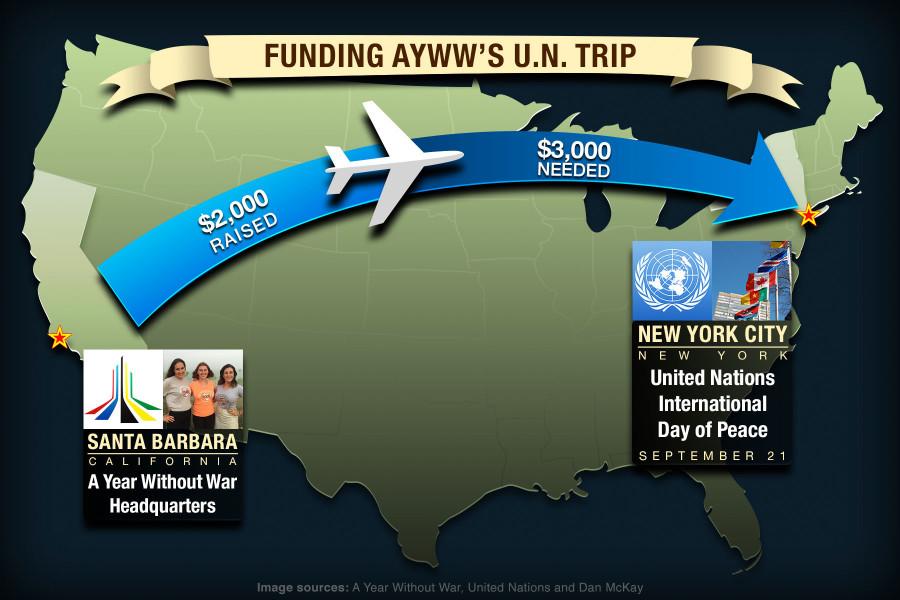 The 2020 A Year Without War organization is sending three representatives to The United Nations International Day of Peace  Sept. 21 in New York City.

The representatives hope to connect with other students at the event to share their ideas. With 130 nations currently supporting the cause, this opportunity could spark even more international involvement.

“Our own fears are what’s holding us back so often,” said alumni Melisa Ashbaugh Johnston. “What if we made 2020 the year without war.”

Professor Joe White and several students created AYWW with the goal of engaging at least 800 million members in fighting for a one–year Global cease-fire in the year 2020.

City College student Sofia Silva, with Alumni Emmaly Read and Johnston, will attend the event as delegates for the organization, along with roughly 700 like-minded students from over 60 countries.

The General Assembly of the United Nations proclaimed Sept. 21 the International Day of Peace in 2001, as a day dedicated to promoting and strengthening ideals of peace for both nations and individuals.

“We also really want U.N. Ambassador Samantha Powers to give us her support to get 2020 recognized as the year without war,” Johnston said. “She is an amazing woman who has really helped bring peace to our violent world.”

The delegates hope to be selected to present their 2016 Peace Project Proposal, to recognize Aug. 27 as The Day the World Outlawed War. The proposed global holiday would celebrate the day that over 60 nations outlawed war in 1928.

However, only a small number of the 700 students attending the event will be chosen to present their Peace Project Proposal.

“We really want to get our name out there,” said delegate Sofia Silva.

The trip is expected to cost the group $5000 and as of Sept. 10, they have raised $3000. The group received the contributions during the first 10 days of launching their campaign.

The organization also received a $1000 matching grant from an anonymous supporter on Sept. 9.

To match the grant, the group members are selling wristbands and T-shirts on the organization’s website. They also received support from a local candy shop, Sweet Alley, which donated 15 percent of its total profits on Sept. 10 to support the group’s efforts.

All further proceeds will help the delegation with expenses in New York City, such as hosting dinners and hotel fees.

To support the organization in its efforts to recognize Aug. 27 as The Day the World Outlawed War, readers can sign the petition on their website.