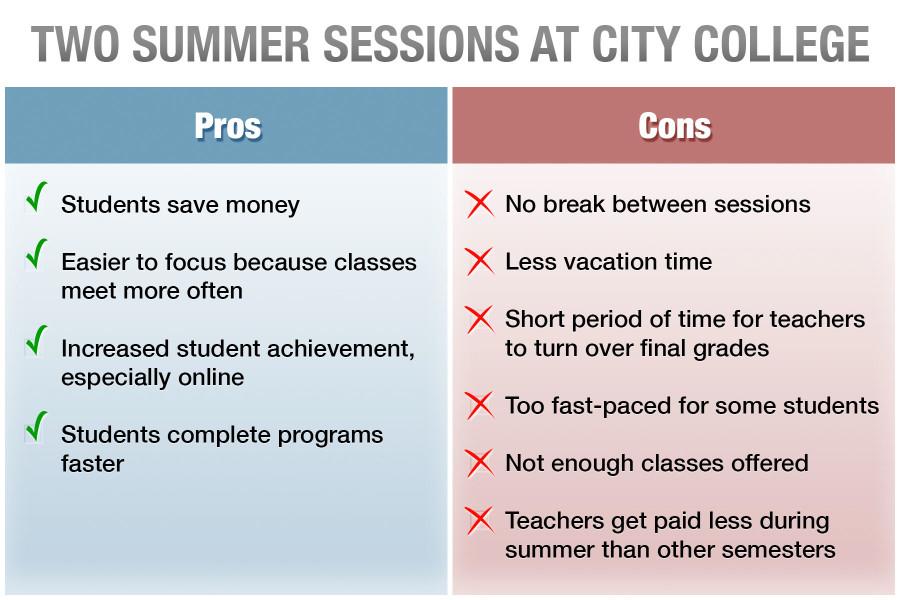 According to Executive Vice President Dr. Jack Friedlander, 37 percent of City College students took one or both summer sessions, but with full-length courses condensed into six weeks, some struggled to keep up.

“It’s intense, it’s six weeks instead of the semester….” said Isaac Eaves, president of the associated student government. “It just depends on if the students can handle it or not.”

The sessions enable students who enjoy the fast pace to transfer to a four-year university quicker, and also save money by completing their programs faster.

“I love the fact that I could get more done,” said student Ruqayyah Mansour. “I took classes last summer as well, but because of the two sessions I was able to get three classes done, which is almost a semester.”

According to Friedlander the majority of students and teachers who participated had a positive experience.

“Student grades and course completion rates were as high, if not higher, each of the summer sessions than they were in the past,” Friedlander said. “That was especially true for students taking online classes.”

The most common negative feedback from students was that there were not enough core classes offered.

“I wish there were a little more,” Mansour expressed. “Some political science classes and an Arabic class I wanted to take were not offered.”

For some teachers, the double sessions were difficult in other ways.

“I found that the salary we were paid to do a class was significantly lower than what we would get paid for an extra class during the semester and I found that problematic,” said Anne Redding, chair of the justice studies department. “Really not much of an incentive for me to want to continue teaching summer sessions.”

Teachers also dealt with a faster paced schedule that only gave them 48 hours to submit final grades between sessions.

“I would not call it enjoyable. There were some things that I was concerned about including the ability of students to really grasp the material,” Redding stated. “There was so much in such a small period of time that I don’t think they had the opportunity to digest it, and critically think about it, and even discuss it as we would over a 16-week semester.”

“It’s exhausting, but it’s challenging more for the students than for me because it is so much information so fast,” Zackrison said. “I think the students who didn’t do so well, they will come back. But I think it’s a good thing to offer for students that are willing to put in the time.”

The College Planning Council will be voting on Sept. 15 with input from the Academic Senate to determine if City College will continue to offer a double summer session. Friedlander will be presenting a comprehensive evaluation to the council that includes a student and faculty survey.

“We’re here for students and our role is to figure out how to make it work for students,” Friedlander said. “As a student centered college to me [two summer sessions] would be the right decision.”