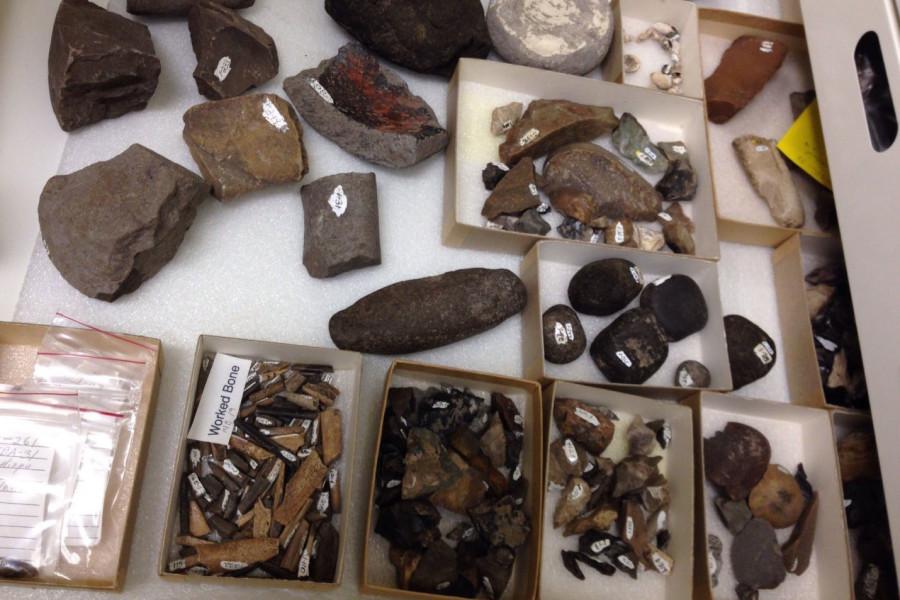 Chumash artifacts made from stone and bone, excavated by now-reitred Anthropology Professor Denis Ringer and his archaeology field classes from 1969-1974, from a site on City College's East Campus called Mispu, meaning 'Place of the Hand,' pictured Monday, April 20, 2015, at The Santa Barbara Museum of Natural History. The site is estimated to be over 8,000 years old.

Two City College professors are trying to resurrect research on a 30-year-old treasure trove of Chumash artifacts excavated from under East Campus.

More than 50 boxes of artifacts that were excavated from two archaeological sites spanning the areas from Cliff Drive to La Playa Stadium have been sitting unanalyzed and at the Santa Barbara Museum of Natural History.

“Studies for sites using modern techniques in the city limits are practically non-existent,” said Dr. John Johnson, curator of anthropology at the Museum of Natural History. “We know more about other places like Rincon, Goleta, and the islands.”

The site on campus is known as Mispu, meaning “the place of the hand.” It is an estimated to be about 8,000 years old.

Retired Anthropology Professor Dennis Ringer and his archaeology field classes performed the excavations on Mispu from 1969 to 1974.

Dr. Phyllisa Eisentraut, department chair of anthropology and sociology, and Professor of Archaeology Mark Sanders have done extensive work to organize and begin the process of studying the artifacts, but have only made a dent in the work that needs to be done.

Eisentraut does not have the time or resources to continue the artifact analysis since becoming the department chair last semester. During her first semester as chair she requested for the school to hire a new sociology and a new anthropology professor through the college’s competitive faculty ranking process. The Academic Senate only accepted Eisentraut’s request for a sociology professor.

Eisentraut said that having another anthropologist on staff would help her have extra time to continue to study the artifacts. She will continue to submit requests for as long as it takes, “which may be years and years,” she said.

From the little that is known of Mispu, it can be concluded it was a central trading area with resources originating all the way from the coasts of Oregon and Washington. The Chumash who inhabited the site had trading power because of their access to asphalt, which was used for many purposes like making woven baskets watertight.

Dr. Johnson believes that further study would shed light on whether or not the Chumash people were affected by catastrophic events such as tsunamis. The recently discovered fault line underneath Ventura supports his theory. An earthquake at the fault could have caused a tsunami that would have affected the coastline of Santa Barbara and Carpinteria.

“City College never retained ownership of the materials when they were transferred,” Johnson said. “They belong to the Museum now.”

In 1990, when Ringer left to work with a study abroad program in China, the building that the artifacts were stored in suffered from vandalism and a fire that caused damage to the Chumash materials. Soon afterwards the college transferred all of the Mispu artifacts to the Santa Barbara Museum of Natural History without Ringer’s knowledge, Johnson said. Ringer declined to be interviewed for this story.

The Santa Barbara Museum of Natural History has offered to publish the research and analyses as a book in their series called Contributions to Archaeology. The artifacts still need over 1,000 hours of lab work until the research is complete, Johnson said. This includes the use of dating methods such as radiocarbon dating, which requires funding.

“I’ll help pay for those out of my museum fund,” said Johnson, “I can come up with something.”

In the mean time, Eisentraut said she plans on continuing the research on the artifacts this summer.