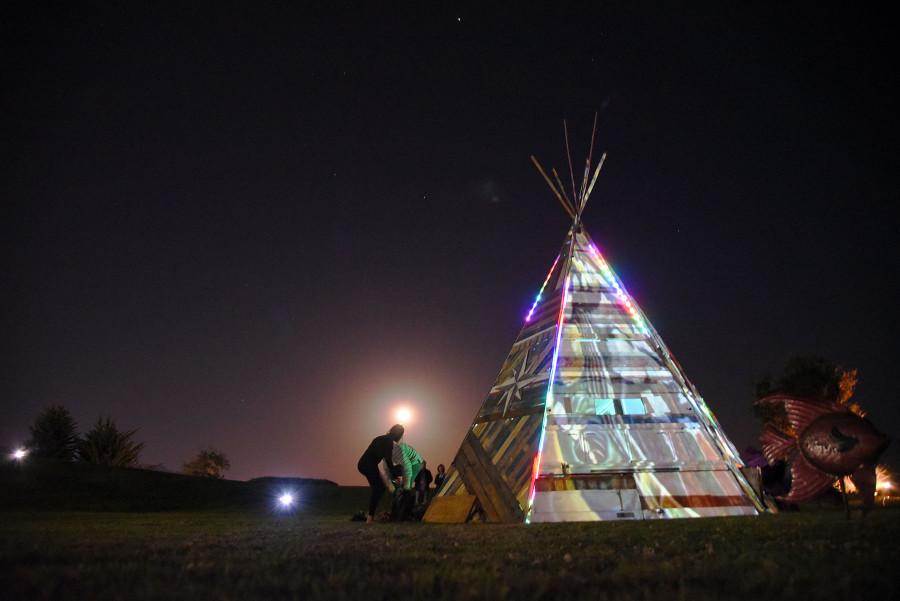 When Native American students first saw an unfinished wooden structure on Wednesday, March 4, at West Campus they didn’t want to believe it would ever become a teepee.

“What people don’t understand is that for many Native people, spirituality and sacredness are not separate from everyday life,” said Native American student Eli Cordero. “When you take something from the culture you’re taking something that’s important to us on that level.”

The artists who made the installation during their time-based media course envisioned and publicized a place of positive vibes and community engagement.

“First and foremost, it is important to acknowledge there was never an intention to undermine a culture or group of people, let alone offend anyone,” the artists said in a statement addressed to the student body.

City College administration, members of the art department and other Native American representatives met early in March with the students who had the opposing perspectives.

The Native American students said that the installation was a form of appropriation that was hurtful to them. The art students described an interest in the architectural aspect and a hope for reflection in a sometimes stressful college atmosphere.

The groups then separated and the decision of whether or not to remove the piece was left to the artists.

What followed was a collaborative dismantling of the structure. According to the artists’ instructor Elizabeth Folk, the group came together to encircle the empty space where the controversial teepee once stood. However, as Native American student Carmen Cordero pointed out, this void was soon filled with equally divisive dialogue.

“I was told by other students to just get over it. Don’t feel angry about it, don’t feel anything about it,” said Cordero, Eli’s sister.

Within faculty discourse, some called the removal of the teepee an act of censorship and a threat to artistic freedom. Others voiced concern for the lack of a safe space for marginalized students to convey their pain and anger.

“I was most disturbed by the accusatory, negative, and hostile tone directed at those who said [the teepee] was culturally offensive,” said Tina Foss, a Native American studies instructor at City College. “I thought the students whose art was being commented on handled it appropriately.”

She continued, acknowledging that nobody forced the artists to remove the piece. She felt that once they saw that their art didn’t send the message they wanted, they showed understanding by deciding to take it down.

In the aftermath of the incident, Executive Vice President Jack Friedlander announced an upcoming forum titled “Inspiration or Marginalization? Cultural Appropriation and its Impact.” The event is scheduled for 12:45 to 2:15 p.m. on Tuesday, April 7, in the Garvin Theatre.

It also inspired the creation of a Native American students club on campus, a demographic that makes up less than one percent of the student population at City College. During a meeting on March 20, members articulated their frustration with the recent events.

“I’ve been involved every step of the way,” said Eric Heras, founder and club member. “I voiced my concerns not only for myself, but for everyone who was hurt by this.”

That includes Native American student Jacqs Nevarez, who is majoring in social psychology with a minor in studio art. They noted that City College had previously been recognized for its quality and focus in facilitating underrepresented and minority student success.

“It’s bewildering that this level of ignorance and racism would occur at an institution that has been celebrated as tied for No. 1 community college in the nation,” said Nevarez.