A passion for education inspires new Board of Trustees president 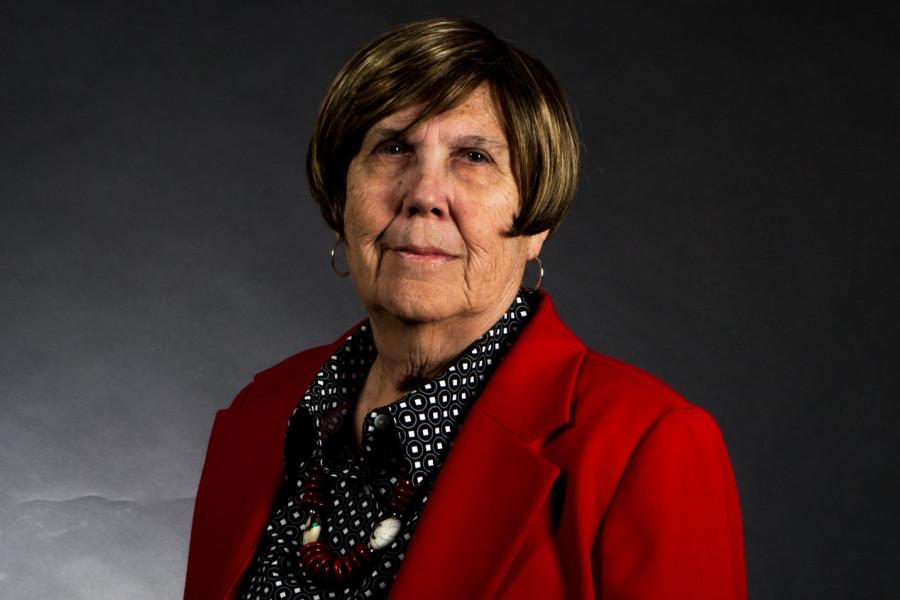 Representing the district of Goleta, City College’s Dr. Marianne Kugler is President of the Board of Trustees, pictured Friday, March 6, in the Occupational Education 184 studios in the Photography Department on East Campus. Kugler has been a Board member since 2012 and was elected president in December for a one-year term after running unopposed.

With her mind set at a young age on becoming an elementary teacher, the new president of the Board of Trustees has always planned on a career in education.

Dr. Marianne Kugler, 74, has served as a trustee since 2012 and represents the Goleta area. She was elected president in December last year and gained her title for 2015.

Before she became a trustee, Kugler was on the search committee to find a new president for City College. She said that it was her admiration of Superintendent-President Dr. Lori Gaskin and the idea of watching her change the direction of the college that made her consider becoming a board member.

“It would also be fun to help the college transition in a lot of ways,” Kugler said. “That’s what made me decide I would like to run.”

Every December, the board swears in members who will represent the districts for the following year. This is also when the board votes internally and elects the president.

As members of the board, Kugler explained that the board’s responsibility is to represent their districts, develop policies and review them.

“We don’t actually do the work of the college,” Kugler said. “We’re overseeing it.”

Kugler grew up in Idaho, but she and her family moved to southern California when she was 14. This is also where she met her husband, who was a resident of the same town. He is a musician and a mathematics tutor currently working at City College.

Before moving to Santa Barbara in 2005, Kugler studied at Michigan State University where she received her doctorate in education.

“Her background just lends itself to administration in colleges,” said Marty Blum, vice president of the board. “She’s a natural.”

Kugler later worked as a professor and then became dean of education and human services at the same college.

“Education and service is what I’ve done my whole life,” Kugler said.

“There are lots of interesting places,” Kugler said. “But there is no place more beautiful than here.”

Student Trustee Nicholas Steil has been working with Kugler since she joined the board two years ago.

He said he noticed that after Kugler became president, she put effort into steering the meetings towards a more organized structure.

“I see her trying to bring more order to the way the meetings are run,” Steil said. “I really appreciate that myself. I like structure, especially in bureaucratic settings.”

Steil describes the new president as a sweetheart who always “opens the meetings with a very warm welcome.”

“I feel that she really values my opinion as a student representative,” Steil added.

Since she moved to Santa Barbara, Kugler has been taking adult education classes at City College, a school she’s said to admire for a long time.

“SBCC is as good as I thought it was,” Kugler said. “It’s doing exactly what a community college was designed for.”

Blum explained that Kugler’s knowledge of the Center for Lifelong Learning also gave her an advantage as president of the board.

Kugler said that she never anticipated the many possibilities within the educational trade, and considers herself as one of the lucky ones to experience it. “If you go into education, you have so many opportunities that you would never have dreamed you might have had,” Kugler explained.

After being president of the board, Kugler will continue as a trustee for one more year to serve out her four-year term. She said that she then plans to focus on her art, another life passion of hers.

“I paint, and you could not possibly be in a more beautiful place for that,” Kugler said.