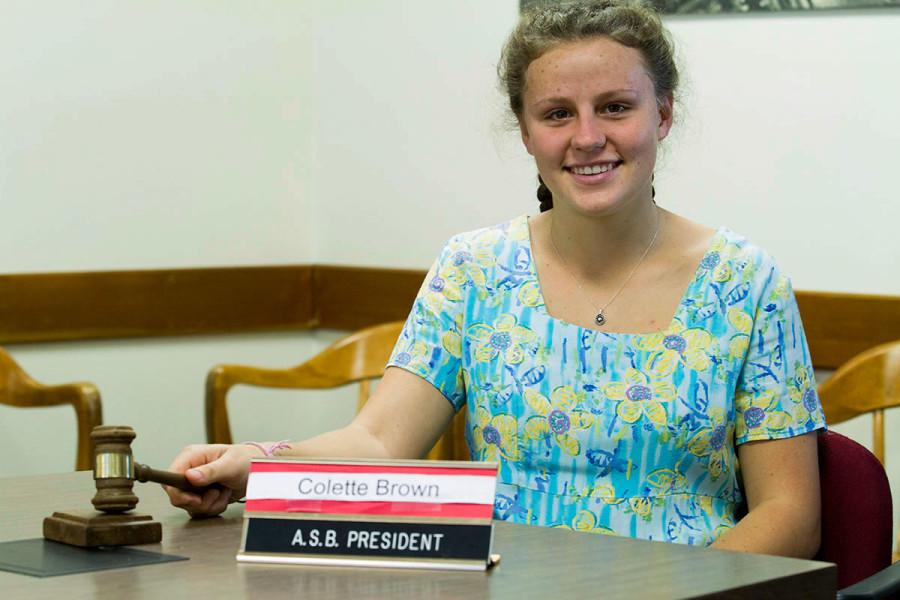 Colette Brown, new president of the Associated Student Senate, in her office Friday, March 6, at City College in Santa Barbara. "It is tough with all of the time commitments, and especially school on top of everything. Sometimes it almost feels unbearable, but at the end of the day it’s definitely worth it,” says Brown.

The typical high school senior is worrying about prom night and whether or not they’ll walk at graduation.

However, 17-year-old Colette Brown is not the typical senior. In addition to preparing for graduation, Colette invests a great deal of time representing tens of thousands of City College students as President of the Associated Student Government.

“It is tough with all of the time commitments and especially with school on top of everything,” said Brown. “Sometimes it almost feels unbearable, but at the end of the day it’s definitely worth it.”

The president has many responsibilities such as attending important events on-campus, participating in multiple committees, and representing City College on and off campus.

Despite her young age, Brown has successfully managed to balance school, life, and the responsibilities of the senate.

“Since starting with the senate, I have been nothing but impressed with the talents and great enthusiasm that Colette brings to the table as our president,” said senator Ethan Bertrand.

“I came here to get a better education than I was getting at Santa Barbara High,” she said. “I’ve definitely gotten that here.”

Before transferring into the program, Brown said that she was more socially and politically active outside of school. She joined the Youth and Government program at the YMCA, where she currently serves as a board member.

During a nerve-wracking first week of classes, Brown found herself observing a student government meeting and decided to apply for the senate.

“There was one spot left and it was me competing against another girl, and I ended up getting it,” she said. “That pivotal moment has kind of shifted where I will go with the rest of my life.”

Brown became Commissioner of Clubs in Spring 2014, and was then elected Vice President of Internal Affairs for Fall 2014.

By December that same year, the majority of the senate had resigned mysteriously after codes of conduct violations in the student government. Due to the vacant Presidential seat, Brown was then required by the ASG Constitution to fulfill the position’s responsibilities, only weeks before the end of last semester.

Amy Collins, advisor of the student senate, said that she believes Colette has done an “outstanding job taking on this position.”

Determined, she has effectively maintained order as newly appointed representatives have rapidly filled the seats of the senate.

“Having more manpower is always a good thing but it does get hectic at times,” said Brown. “I think it’s difficult because there’s always a learning curve when we have that many new senators. They are definitely learning quickly and everyone is doing a really good job.”

Fueled by self-motivation and the support of her family, Brown hopes to establish an event or project for this semester that will aim to “get students more involved and become more aware of their school.”

Brown admitted that while she loves City College and her hometown, she is ready to explore her options next year at a university.

“I definitely want to get out of Santa Barbara, and so I applied to 12 different schools,” said Brown. “I’m ready to meet new people and I’m excited, but it’s scary waiting for all of the acceptances and denials.”

While currently undeclared, Brown stated her interest in exploring aerospace engineering and has expressed that UC Berkeley, Cal Poly SLO, and Dartmouth are among the universities that she would be happy to attend.

As senate elections rapidly approach, she is confident that any current senate member would be qualified to run and represent the student body.

“I think a lot of them are willing to work with me and so I think no matter who ends up running for president, it’s going to be amazing,” she said. “I’m really, really excited.”