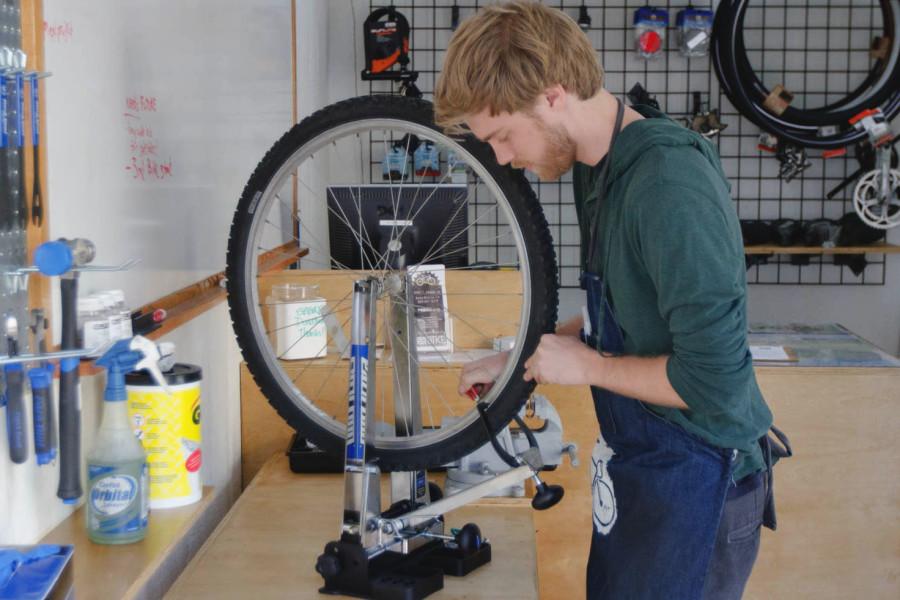 City College opened its first bike shop this semester, a project that provides students, staff and faculty who bike to campus with a new service center.

The shop, Bici Centro, is located in a little blue shed on East Campus by the bridge between the two campuses.

The shop has been available since the beginning of spring semester, but had its grand opening on Monday, Feb. 9, when Superintendent-President Lori Gaskin cut the red ribbon and officially announced the shop opened.

“It has been pretty busy,” said Kevin McClintock, one of the two City College students who work in the shop. “We’ve had an average of five to 10 people a day fixing their bikes, and another 15 that ask what we are and what we’re doing.”

The project is a joint effort between City College and the Santa Barbara Bike Coalition, initiated by the Transportation Alternatives Group last year.

The coalition operates and manages the shop, however the project is entirely funded by the college.

The shop is a smaller version of the Bici Centro located downtown and mirrors most of what is offered there. The one located on campus provides City College bicycle commuters with a do-it-yourself bike shop, where they can repair and work on their bikes for free.

“It’s a rewarding job,” McClintock said. “I get to work with somebody, or with groups of people, and show them ways to improve their bike.”

Michael Vergeer is a board member of the coalition and also serves as the manager of the shop. He explained that this year there have been many efforts to encourage transportation alternatives for people commuting to the college.

“Bicycling is obviously one of these,” Vergeer said. “So we have a lot of support from the school to open the shop here.”

The project is a City College effort to decrease the number of students commuting in cars and to increase the amount that uses bicycles.

Last year, the Santa Barbara Police Department reported an increase in bicycle accidents and Santa Barbara was ranked as the third worst place to cycle in the state.

Students as well as other community members have expressed concerns about the dangers of the road and the undeveloped bicycle infrastructure in town.

Joseph Sullivan, vice president of business services, said that safety issues are still one of the main reasons for college members not to bike to school.

However, one of the services offered at Bici Centro is to help commuters find an alternative bicycle route to avoid dangerous roads and find the safest way to City College. They are also offering classes on bicycle commuting throughout the semester.

“We can solve all of your biking problems, and we want you to give it a shot, “ Vergeer said. “Come and join us.”