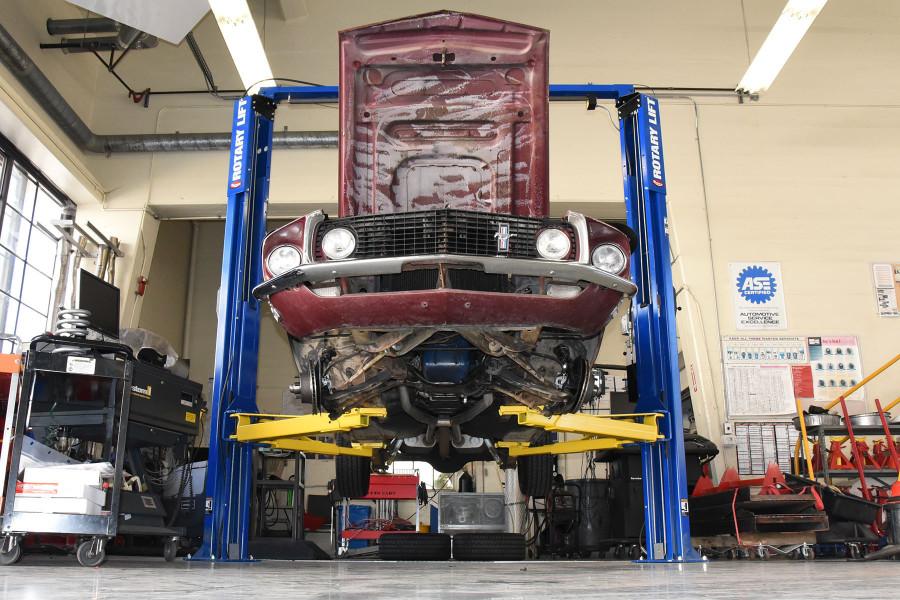 The Santa Barbara City College’s automotive program recently updated their facility with the addition of a new hydraulic lift, Thursday, Feb. 12. The lift is much safer for users and is capable of lifting large, heavy vehicles.

City College’s automotive program purchased a valuable new asset over winter break in the form of a new hydraulic lift.

The new lift, which is manufactured by Rotary, has the capability of servicing heavy-duty vehicles, particularly full size trucks and vans. The lift provides the shop with easier loading and lifting of larger vehicles and has the ability to service heavy duty vehicles owned by the college.

“I think we will be able to accommodate different vehicles that we can’t with the in-ground lifts,” said Josue Miranda, the auto shop teaching assistant, referring to the school’s older in-ground lifts that have been a fixture in the shop for years.

“It’s easier to use, it’s less research for students. I think it’s pretty straightforward,” said Miranda when comparing it to the old lifts.

Miranda also stated that in terms of safety the new lift is much safer for users and features a high-tech locking mechanism to prevent vehicles from falling during a large earthquake.

The lift utilizes an electric pump with a hydraulic pressure system to hoist vehicles and is regarded by Rotary as being one of their most dependable designs ever.

“This thing is much better than the older lifts. I can actually stand under it without the arms being in the way,” said student Sean Griffiths while using the lift to perform an oil change on his 1998 Toyota Camry. “More area of the chassis is accessible on the car.”

While the new lift will certainly be a benefit to the automotive shop at the school, it is no stranger to the instructors and students who are familiar with the program.

Two of these identical lifts have been in use for several semesters in the engines lab on campus and have been a major help to students enrolled in the program’s Engine Rebuilding class.

The addition of the lift brings both facilities up to date with the same kind of equipment used by many professional automotive service technicians around the world.