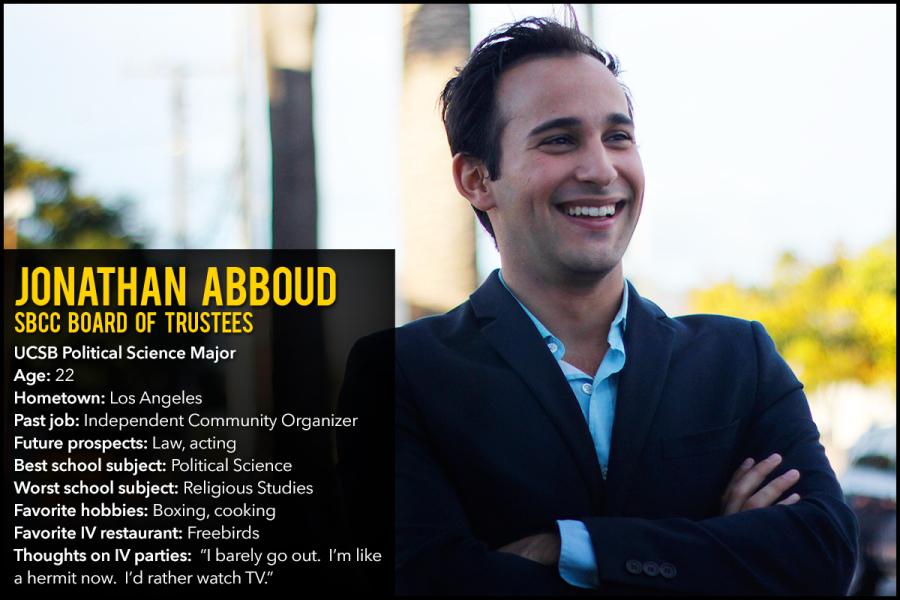 Jonathan Abboud is a 22 year-old Political Science major fresh out of UCSB.

Having just graduated earlier this past June, Abboud has already made a splash for himself in local politics. Abboud won the Board of Trustees position for District-6 in Isla Vista, beating opponent Ethan Stone.

“It actually wasn’t as intense as previous elections until the last day,” said Abboud about the race.

Jonathan ran on a platform of strong community ties and having student interests in mind. The newly elected Board of Trustee member resides in Isla Vista, and has been working in the local community over the course of his education on the issue of Isla Vista self-governance.

Student Trustee Nicholas Steil was excited for someone who would be “seeing the perspective of the college community.”

“It’s inspiring to see someone so young running for public office,” Steil said.

Abboud started in journalism where he worked on his high school newspaper. It wasn’t until a friend encouraged him to run for ASB President at UCSB that he got involved in politics. After losing his first race, he came back the next election to win the presidency.

After working on Isla Vista self-governance for so long, Abboud wanted to find a position where he could have more of an impact on the lives of IV residents.

“I don’t really like politics outside of what’s happening locally,” he said.

When he decided to run for the Trustee position, Abboud approached the Democratic Party of Santa Barbara for an endorsement. Daraka Larimore-Hall is the Secretary for the California Democratic Party said that Abboud has a long record of representing key constituents.

“I had met most of them by the time I went for the endorsement,” Abboud said. “Preparing so much made it easy.”

Though he was able to get the endorsement from the party, Abboud said he doesn’t identify as a democrat.

“I feel like they are very weak people,” he said about the Democrats in general. “Weak-spined people.”

Instead he says he identifies as a liberal.

Abboud wants to focus on representing the students in his area, and tries to be easily accessible to his constituents. He tries to keep up a strong online presence as well.

“If someone asks me a question on Facebook I will reply right away,” Abboud said.

While Abboud is recognized for being close to his constituents, some have said he may be getting a little too close. Many students have reported seeing him at parties and large events, but Abboud says he isn’t worried about the backlash.

“I think you can party and not be like blacked out drunk,” Abboud said when asked about the rumors. “I just control my intake.”

Jonathan is currently spending his weekends studying for the LSAT. He may eventually want to transition to the legal world.

Abboud will take over for Lisa Macker in January, and regularly attend the Board of Trustee meetings on-campus.

“It’s time students have a voice in the running of City College,” said Larimore-Hall.