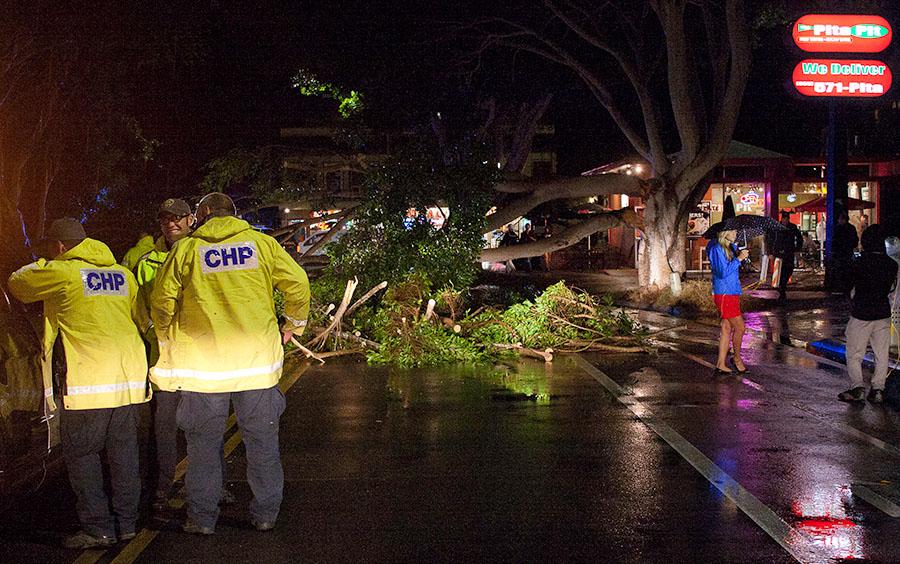 California Highway Patrol officers watch as the local news reports on a fallen tree limb from heavy rainfall on the corner of Embarcadero del Mar and Trigo Rd. on Friday, Oct. 31, in Isla Vista, Calif. Halloween weekend in Isla Vista usually draws thousands of people, but this year it was almost deserted because of enhanced safety regulations and the unexpected rainstorm.

Halloween weekend in Isla Vista turned out to be quiet and safe for the locals and City College students alike – without any major incidents.

The Santa Barbara County Sheriff’s Office reported less than 40 jail bookings and less than 40 citations issued, a significant decrease of incidents compared to Halloween weekend in 2013.

Last year, Halloween in Isla Vista, a three-day operation, ended with over 173 people arrested for public intoxication. There were also over 200 jail bookings and nearly 250 issued citations, many of them involved non-locals.

Kelly Hoover, the public information officer for the  Sheriff’s Office, said that the department appreciated the proactive work of students from City College and UCSB for not inviting out-of-towners and also the community campaign for keeping Isla Vista safe during the weekend.

Halloween weekend usually attracts tens of thousands of people to celebrate on the streets of Isla Vista, many people from other areas. However, this year’s estimated crowd was barely a few thousand and consisted of mostly local residents.

Quincy Briscoe, a 21-year-old City College student, lives in Isla Vista and celebrated Halloween there this year and last.

“This year felt like just another Friday night,” said Briscoe. “It was more united.”

He said that Halloween this year was more localized without a large number of out-of-towners that came and celebrated the holiday.

The weather also helped keep the streets of Isla Vista empty on Halloween, and at 9 p.m. on Friday, heavy rain discouraged people from out of town to visit and kept locals indoors.

The streets were nearly empty and the pouring rain and clogged drains flooded the Isla Vista Theater that was being used by the law enforcement as a staging area.

The Sheriff’s Department said the rain was another factor that helped lower the numbers of incidents during the night.

One of the main goals for this year’s Halloween was to keep the holiday local with implementation from both the Sheriff’s department and the residents of the area.

Enhanced attendance of 200 law enforcement personnel worked together to keep the community safe.

Biscoe said he felt closer to law enforcement this year and he noticed the benefits of the increased numbers that helped to keep the non-locals away.

He also said that he felt more respect toward the patrolling officers this year and that the mutual aims made if feel like the community and the police worked on the same side.

“Last year was more fun, but it came with a cost,” said Briscoe. “This year was not that exciting thanks to the increased law enforcement that kept it mellow.”