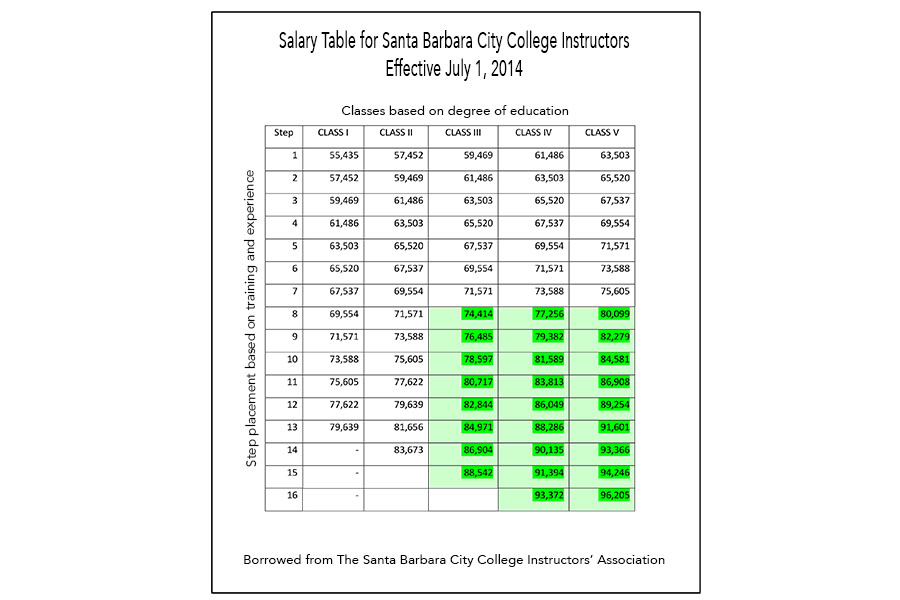 The final count shows 96 percent in favor, granting more money earned by long-term instructors. An online ballot was cast on Moodle to accommodate online teachers and others that may not be able to be present.

The increase will be granted this Oct. These changes are worth over $1000 for every step of the salary schedule.

The adjustments are to be hand calculated according to Human Resources Vice President Patricia English. “The people doing that already have full-time jobs–but it’s being completed.”

“More than a decade ago the salary schedule was restructured to push up the salaries in the entry level classes,” Alsheimer explained. “We did that to attract the most qualified faculty members to this college. This was for sure a good step because we became the number one–right?”

The school’s faculty said that this was unacceptable for the number one community college in the nation.

This matter was brought before the Santa Barbara Community College District to initiate a salary study. The District agreed to have a study on faculty salaries, which is modeled after the Ewing Study from last year using the same colleges in a salary study for classified staff and managers.

“Faculty felt it would be fair to do the same to men,” English said regarding the Ewing Study.

The study consists of 10 similar California community colleges the district selected due to a non-existent statewide standard pay varying salaries between institutions. The schools compared were coastal schools with relative enrollment and ratings.

City College was below the medium of the others.

The Instructors Association’s work strives to meet the median of other colleges pay rates.

This was the first time City College participated in interest based bargaining, which is the process that people come with open cards so both position on an issue can identify shared interests.

“It was a successful experience,” Alsheimer stated.” It was a very productive round of negotiations.”

“We’re just playing catch up after last year’s study on how we pay our long term faculty,” said English.