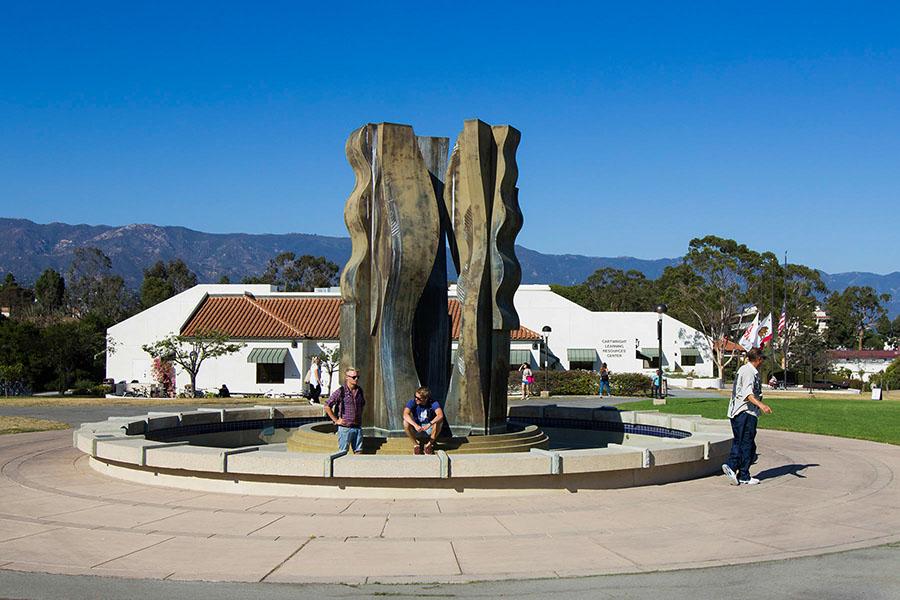 City College students Mattias Larsson and Isac Westford Stadell hang out in the west campus fountain between their classes, Thursday, Sept. 11, 2014 in Santa Barbara. It is currently illegal to run the fountain in order to save water during the drought.

City College is quickly acting to help Santa Barbara County conserve water during one of the most severe droughts California has ever seen.

According to City College Grounds Supervisor Mark Broomfield, who has a Bachelor’s Degree in Biology and specializes in Horticulture, water conservation has become one of the most important issues on his department’s agenda.

“Every drop we save is invaluable,” Broomfield said. “We’re in a horrible, horrible drought. I’m trying to use the very least amount of water to make as small of an impact as possible.”

Broomfield said some areas of City College now receive only the bare minimum amount of water needed to survive, so students may see some grassy areas browning because of this. He added that City College is considering replacing these lawns altogether with native plant species that would require less water and maintenance to prosper.

“Everything I plant now has to have a multi-purpose,” Broomfield said. “They have to be drought tolerant, provide nutrients to other plants, and contribute to building a system where one plant takes care of the other.”

Some City College students have been researching methods to create more efficient water usage on campus. Daniel Para, a soil intern who studies within the horticulture department, said his Permaculture Design class has been developing ways to use high quality compost to promote plant growth while using less water.

Para said that his department works with the groundskeepers to develop long term solutions to issues of water and plant conservation. Broomfield explained that these issues are priorities not only because of the ongoing drought, but to prepare for droughts in the future.

“We weren’t prepared for this drought. And you can’t prepare for a drought in one month, one year, or even a couple years,” Broomfield said. “It has to be a way of life. And when this drought ends, you can’t just fall into the same habits that you had before.”

The City College Grounds Supervisor urges students to do their part to alleviate the county’s dire circumstances. He advises students to take measures that will reduce their water usage at home and help prevent an even worse situation next year.

But how bad could it get?

“Bad,” Broomfield said. “Next summer they could be saying, ‘Now you can only shower twice a week’, or ‘No more watering your lawns at all’”.

The City College has always been proactive when it comes to issues of environmental awareness and preservation. The school uses mostly recycled water. But last year the county decided to shut down it’s water-recycling plant to replace valves and pipes to make it more efficient.

This is a good thing, says Broomfield, except that it’s being done during the worst drought California has seen since 1895. This means that 38 parks and 12 schools will be without recycled water until June of 2015. He said this year has been particularly hard on some of the trees on campus.

He expressed specific concern for a grouping of trees outside of Student Services, a species called Agathis Robusta, which is the only grouping of that tree species in the entire west coast. But those aren’t the only trees affected.

“We could start seeing perennial plant growth death. You can tell this year has been particularly tough on our oak trees and Monterey Pines.”

Broomfield said students who want to do their part to help City College conserve water are encouraged to contact school faculty if they see anything water-related malfunctioning while on campus. There are only eight groundskeepers to cover all 75-acres of City College.

“We’re all in this together,” Broomfield said. “Every drop counts.”